It's too late to be doing this, says Horner of flexing clampdown 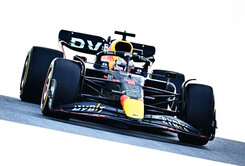 While insisting that it is already too late to be changing the regulations for 2023, Red Bull boss, Christian Horner insists the clampdown is only for the benefit of one team.

While this year's main title challenge comes from Ferrari, it is clear that the antagonism between Red Bull boss, Christian Horner and his opposite number at Mercedes is as strong as ever.

With the German team's season getting off to such a bad start, Toto Wolff appeared to fall off Horner's radar, however the FIA technical directive over porpoising was to change all that.

As the finger pointing continued, the FIA announced that the metric by which bouncing would be measured would be introduced at the Belgian Grand Prix, along with new restrictions on flexing floors.

To add to the fun, following last week's meeting of the Technical Advisory Committee, further changes for 2023 were announced. These include the raising of floor edges by 25mm, along with the raising of the underfloor diffuser throat. Furthermore there will be more stringent lateral floor deflection tests and the introduction of a more accurate sensor to help quantify the aerodynamic oscillation.

"I think the problem is what they're looking at as a remedy for next year," he said. "The directive, it's neither here nor there for us.

"I think there's an awful lot of lobbying to change the regulations significantly for next year, so a certain team can run its car lower and benefit from that concept," he added.

"It's a very late point in the year to be doing this," he insisted. "I think the president is doing the right thing, he's collating all of the information, and hopefully a sensible solution can be found. Because it's too late in the day for fundamental regulation changes, which something like that would be."

According to the Red Bull boss, that 'certain team' should do what his - and others - have done and just get on with it, rather than - as it appears - seeking the help of the FIA.

"We haven't had a problem all year," he said. "There's only one team that has had a big problem... just run the car higher, it's easy.

"We've got some of the most talented engineers in the world in this sport, and I can almost guarantee you if we came back next year, there would be no cars with issues.

"With the last few races, it's looked okay. Here it looks okay. What you don't want to do is kneejerk into an overreaction that could have fundamental impacts on next year's cars."

It's understood, that other than Red Bull, Ferrari, Alfa Romeo, Haas and Williams are unhappy with the proposal, arguing, contrary to what the FIA is saying, that it is not a safety issue.

However, as is so often the case in F1, not everyone agrees.

"We are happy with the decisions from the FIA side or the leadership from the FIA's side regarding that topic," said Andreas Seidl. "When all this started regarding the TD, the FIA made it clear that it is based on safety. That's why I think it's also very important now to follow through and not give way in any direction. So we're very happy with that.

"We are an independent team and we make up our own minds and fight for what we think is correct," he added. "We are supportive of the lead here from the FIA. It is still an ongoing discussion, which is also normal. But in the end, I guess we will have clarity soon and then just focus on that, go ahead."

Meanwhile, in a move which certainly plays right into the hands of those who feel the sport is basically scripted to fit the Drive to Survive narrative these days, F1i.com quotes an unnamed team principal who warns: "The changes are so extreme for 2023 because Mercedes claim that they have found 40 per cent more downforce for next year, so they have urged the FIA to act.

"If Mercedes have genuinely done that, then you may as well hand them the world championship now," they ominously add.

Check out our Friday gallery from Le Castellet here