Herta in action at Portimao

IndyCar driver, Herta began the two-day with McLaren on Monday, the American at the wheel of the Woking outfit's 2021 car.

The youngster, who served his racing apprenticeship in Europe, racing with Carlin in the British and Spanish F3 championships, before returning to the States, first for Indy Lights and then IndyCar, has made no secret of his desire to race in F1.

"It is a serious ambition of mine," he said recently, according to F1i.com. "There’s a lot of things that when I'm done racing I want to be able to say that I did. And Formula 1 is pretty high on the list for one of those things."

The test comes at a time there is continued doubt over Daniel Ricciardo's future with the Woking outfit.

Zak Brown kick-started the rumour mill when he claimed that the Australian had not lived up to expectations. 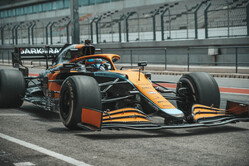 Though he later played down his comments, insisting that he has a great relationship with Ricciardo and that the Australian will see out his contract, which includes the 2023 season, he admitted that there are "mechanisms" in place that would allow the Woking team to end the partnership prematurely.

Other than the fact that Ricciardo has yet to fully establish himself at the team and continues to be out-performed by Lando Norris, Brown, wpo always has his eye on the next deal, is only too aware of the sport's increasing popularity in the US.

This, combined with the fact that next season witnesses three races in the country, makes the prospect of running an American driver a sponsorship guru's dream.

F1's owner, Liberty Media, has made no secret of its desire to see an American driver on the grid, and would clearly support any move to secure Herta a seat.

Other than Herta, Florida's Logan Sargeant, who recently became the first American to win a round of the F2 championship, was recruited to Williams' Driver Academy last October and subsequently took part in the post-Abu Dhabi F1 test.