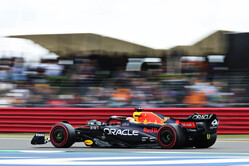 Ahead of today's sole practice session the air temperature is 17.3 degrees C, while the track temperature is 25.9 degrees. It is bright but very cloudy. There is definite sense of moisture in the air, and very windy. Race control claims a 30% chance of rain.

With typical English weather basically washing out yesterday's opening session, teams were left with just one hour in the afternoon to try their various updates whilst preparing for the remainder of the weekend.

Of course, their cause isn't helped by the fact that there are severe doubts over the weather for today and tomorrow.

What we do know is that Ferrari is looking well-suited to this track, as we thought it might, and while Sergio Perez believes Red Bull is "miles off" the pace, Max Verstappen, wearing his very best poker face, looks quietly confident.

Based on yesterday's evidence, Mercedes has taken a step forward, and while the W13 is still bouncing away, Lewis Hamilton admits to being very happy with the car.

Regular readers will be aware that for some weeks now we have been predicting a Mercedes win here, and we have seen nothing as yet to cause us to change that feeling.

However, the weather, reliability, tyre deg and possibly protestors could yet upset things, so it is probably far too early to be making predictions.

The lights go green and Stroll leads the way, followed by Vettel, Alonso and Schumacher. Hards for the Astons, softs for the Alpine and mediums for the Haas. As more drivers head out they continue to sport the full range of compounds.

Alonso posts the first time of the day, a 34.826, while teammate Ocon responds with a 33.068. Like his Alpine partner, Ocon is on the red-banded rubber.

A big, big wobble for Leclerc as he exits Luffield on the run to Woodcote. Both Ferraris on the softs.

Perez heads out ahead of the Mercedes pair, all three on softs.

The Mexican posts a 29.629 to go second, thereby splitting the Ferraris.

Norris, currently sixth, 2.4s off the pace, is the highest-placed medium runner.

Hamilton goes quickest in S2, crossing the line at 29.775 to go third.

Elsewhere, Russell goes quickest in S1, as, after 14 minutes, Verstappen is the only driver yet to appear. Russell stops the clock at 29.757 to leapfrog his teammate for third.

Currently, the Alfas are sixth and seventh, Zhou the quicker of the pair.

Ricciardo improves to ninth, ahead of Norris, Gasly, Latifi and Ocon.

"Remember to cancel the magic," Hamilton is told, as Verstappen finally heads out, on softs.

"The problems from yesterday in the high speed sections are not better," complains Sainz as he goes fifth.

As Russell goes third overall (29.166), Verstappen is on a blinder, going quickest in the first two sectors on his first flying lap. It's a clean sweep of purples as the Dutchman crosses the line at 28.541, 0.480s up on his nearest rival.

"We don't expect any rain for the next thirty minutes," Vettel is advised.

PBs in all three sectors see Sainz improve to third with a 18.882, while countryman, Alonso improve to seventh with a 29.542.

Having completed two cool-down laps, Verstappen ramps up the pace again and improves to 28.498, maintaining a 0.362s advantage over Leclerc.

Another improvement from Verstappen, who this time stops the clock at 28.386. Teammate Perez is currently sixth, 0.716s down.

Hamilton goes quickest in S3, closing to within 0.102s of Verstappen.

With 27 minutes remaining, we've yet to see the McLarens or Alphas on the softs.

Reporting a "few spots of rain on the back straight," Perez is told that it is simply "blowing over". "That'll be it," he is assured.

A moments for Perez at Turn 3, much like Vettel a few minutes earlier, both appearing to be caught out by the wind.

The Mercedes pair head out on brand new softs, as the qualifying sims get underway.

As Hamilton begins his flyer, more drivers head out on fresh softs.

"A bit of bouncing into Turn 6," reports Russell.

However, it's purples all the way for the world champion, who crosses the line at 27.901, thereby establishing a 0.487s comfort cushion.

Albon - sporting the best helmet in the history of motorsport - improves to thirteenth with a 30.033.

Hamilton has pitted without improving his time.

Russell leapfrogs his Mercedes teammate with a 28.426 to go fourth.

Asked if wants to do another push lap or pit for more fuel, Verstappen, such is his understandable confidence, replies: "I don't mind, whatever you want."

"Is the vibration OK?" queries Zhou. "I have more vibration than ever."

While Norris is seventh, teammate Ricciardo is currently 18th.

With just under three minutes remaining, the McLaren pair head out, Ricciardo on mediums.

"Is anyone else improving," asks Hamilton, "because I don't think I can match what I did before."

"Is it going to rain for qualifying?" asks Gasly, aware that a downpour is probably his best chance. "I don't know mate," comes the reply.