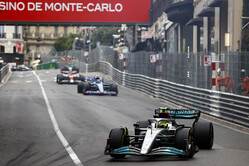 George was able to gain one position during the race, passing NOR after the switch to dry tyres to claim P5. He struggled with right front graining in the final laps. Lewis spent much of his race bottled up behind the two Alpine cars - first OCO, whose robust defence earned him a five-second penalty for one incident and broke Lewis's front wing in a second incident not captured on TV - then ALO, whose slow pace after the red flag period consigned Lewis to a P8 finish.

The team consolidated P3 in the constructors' championship and now has 134 points.

George Russell: That was a tough afternoon out there, very physical with the bumpy ride of the car, and a long afternoon across a range of conditions. It was tricky in the wet, holding onto the wet tyres for as long as possible, then I had a nice dice with Lando after the stops - and some strong pace on the hard tyre. It was tough on the medium in the second part of the race, with a lot of graining towards the end, but P5 is still a decent result. We encountered some of the limitations of our car at this track, but we've learned a lot and can put that to good use in the coming weeks to take another step forward. Overall, it's a decent result and I'm confident that we've got stronger days ahead of us.

Lewis Hamilton: That was one of those days in Monaco - stuck behind other cars for most of the race and, in the end, just cruising but not able to overtake. I was glad when the rain came because that usually creates opportunities, unfortunately it didn't play out that way and we couldn't get past Ocon when I was running on the intermediates. It's been a tough weekend and I've had some unlucky situations, like the red flag in qualifying, so I'm looking forward now to turning the page and heading to Baku. It's a different kind of track, even though there are some similarities to the slow corners here in Monaco, but hopefully we can move forward and show a better level of performance like we saw in Barcelona.

Toto Wolff: That was the usual chaotic race in Monaco - and once again, a lesson that we need to look at this circuit layout, so people can't drive round five seconds off the pace in a procession. This is a fantastic venue and spectacle - but it would be great if the racing could be at the same level. With the length of the race, and the delays and interruptions, it felt more like an NFL game than a Grand Prix - but I'm not sure that much else could have been done. We need to give the race directors credit for managing a difficult situation; the rain at the beginning was torrential, then there was an issue with the connectivity for the TV broadcast which meant we couldn't get going. When we finally did, it was a strong afternoon for George - and a really frustrating one for Lewis. There were the laps stuck with Esteban, who got penalised for the collision, then the slow pace from Alonso, without which Lewis could have been racing Lando and George. It was another reminder that track position is everything here - and that we are the third team on the road. We have learned some important lessons about the car this weekend, and that learning will be the basis of rebuilding our performance to fight again at the front of the field.

Andrew Shovlin: It's been a frustrating weekend for the team and drivers, we weren't anywhere near quick enough on one lap but even in the race we didn't have enough pace. George did a good job to take P5 from Lando on the dry transition and also to hold him behind at the end of the race; luckily, he was only there for one lap. Lewis had a tough time sandwiched between the Alpines for most of the race - we just couldn't find a way of putting him in free air without him needing to overtake which is near impossible. It also seemed that the cold conditions were making life quite difficult for the tyres and both our cars dropped off towards the end of the race. We've clearly got work to do ahead of Baku as there are a lot of similarities between the cornering sections and this track has highlighted our weaknesses.