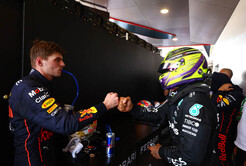 Lewis Hamilton has denied that his suggestion his team "save" his engine at Barcelona was defeatist.

Starting sixth on the grid, the seven-time world champion was involved in a first lap clash with Kevin Magnussen. Battling with Carlos Sainz in Turn 3, the Ferrari edged ahead and as the Briton settled in behind the Spaniard, Magnussen attempted a move around the outside in Turn 4. However, the pair touched, sending the Dane off into the gravel and leaving the Mercedes driver with a left-front puncture.

Rejoining the race at the back of the field, Hamilton subsequently suggested to his team that: "I would save this engine if I was you guys."

However, the Briton was told that eighth was still on the cards and by race end Hamilton was running as high as fourth before being ordered to lift and coast as a cooling issue became critical.

In the aftermath of the race, many thought that Hamilton's engine comment was effectively the Briton throwing in the towel, not only because he was running at the back of the field but because his teammate was once again looking set to out-perform him.

Not so, insists Hamilton.

"It's not being defeatist," he insisted when asked about the call to stop, "it was just I was literally thirty seconds behind."

Citing his race in Jeddah, where he struggled all race long after failing to make Q2 he admitted that he had doubts about the benefits of using "a whole engine to drive around in last or out of the top 15, and at one point we might have to take a penalty or something like that".

"I don't know if reliability is an issue," he added. "We've already seen at the end there was something. I was like, we might as well just save the engine so we live to fight another day.

"But I'm glad we didn't," he admitted, "and it just shows you never stop, you never give up, and that's what I did."

Or rather what his team advised him to do.