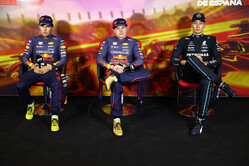 Q: George, what a race, man! Back on the podium. Can we say that Mercedes is back now?
George Russell: I'd love to say that but today was very tough. I gave it everything I could to hold Max off, he did an amazing job, and we are so proud to be standing here. The guys have worked so hard, so this is for everyone back in Brackley and Brixworth, thank you.

Q: We heard at one point that you were having overheating issues and you couldn't push as much as you wanted. I mean how much did it hamper you?
GR: I heard it was a lot to be honest, but when I had the Red Bulls in my mirrors all I was doing was my maximum to keep them behind and it was an enjoyable, good couple of laps and I'm just pleased to be able to bring it home in P3. A lot of points on the board for us. So yeah, well done to Max, he did a great job.

Q: Well done, man. Tell us about the last few laps? Could you push full or did the car still have overheating issues, because we saw with Lewis that he had to back off.
GR: Yeah it was very difficult in the last few laps. It was a survival race, when we knew we had the gap, and as I said, just proud to bring it home in P3 and thanks to all the fans here, they have been amazing all weekend, and the support... Formula 1, at the moment, is in an incredible place so it's great to be here at the moment.

Q: Well done, you did so well. Max, well done, your first victory again since 2016 here in Spain. We saw you having issues in Turn 14, with the DRS, tell us about it?
Max Verstappen: Yeah, I mean of course I went off. I suddenly had a lot of tailwind, so I just lost the rear, went off and then, of course, I was in the train and I tried to pass, but my DRS was not always working. So, yeah, that made it very tough but we managed, due to the strategy, to get ahead again and do our own race and eventually win the race. So, a difficult beginning but a good end.

Q: And you switched to a three-stopper. I mean without DRS or with a DRS not working that well, I mean, how did you manage to overcome that?
MV: Yeah, I tried to stay focused. Of course, it's not nice when stuff like that happens. And yet of course very happy to win and also very happy for Checo. It was a great result for the team.

Q: Your pace with soft tyres was amazing. I mean, at one point you were the fastest by a country mile. Did the soft tyres work very well with your car?
MV: Yeah, I think so. I think the behaviour of the car was good on the soft but also on the medium. I think it was working out quite well.

Q: And on the fight with George. I mean, we saw you a bit of frustrated at one point. I mean, he was closing the door he was changing direction a bit too late.
MV: Yeah, it was more for because of my DRS you know, but yeah, at the end, we managed to get ahead.

Q: Checo, you are Mexican but we're here in Spain. So are you half-Spanish now? Can we say that?
Sergio Perez: Yeah, definitely. I mean, you already have very two good drivers but I've been feeling a lot of support this weekend, so I'm extremely happy to be on the podium for the first time in the Spanish Grand Prix.

Q: A one-two for Red Bull here in Spain. Amazing to be here in the podium. You could have won though.
SP: Yes, I think it was close. But at the end it is a great team result and I'm happy for that.

Q: We heard you on the radio at one point saying 'let me attack George, I can get through'. I mean were you a bit frustrated at that point?
SP: Yeah, we were on different tyre strategies at the time. I let Max by in the beginning, then I thought at the time that I could I could go by and not lose crucial seconds, you know, to make my strategy work, but anyway, it's a good team result.

Q: Max, many congratulations, Barcelona was the scene of your first Formula 1 win and you've done it again. However, you had to do it the hard way today. Just how satisfying is this victory?
MV: Yeah, a bit of a race with two halves, because the first 30 laps were very frustrating for me, after I went off in Turn 4 first of all, which really caught me by surprise, because I didn't feel like I was actually braking later or throwing more speed into the corner. But it was very gusty out there today. Like, one lap it felt all stable and then the next lap suddenly you could have more oversteer in places. So probably that caught me out, by surprise. So that was not ideal, of course. But then, of course, I dropped back behind George and Checo. Checo was so kind to let me by to try to attack George because I think already we were planning to do two different strategies as a team, at the time. But then as soon as I was attacking George, my DRS stopped working all the time on the main straight. So that was extremely painful. Like, sometimes it would open, like, almost halfway on the straight or not at all. So yeah, that made me stuck behind George for 20 laps solid. So it was a tough one.

Q: Couple of things to pick up on there. Was there any damage after running through the gravel at Turn 4?
MV: Didn't feel like it. I mean, there is, of course, gravel there. But I didn't feel like I damaged the car, because once I was back on the track, the car felt like normal. So I was lucky there, of course.

Q: And the DRS problem? Is there anything you can do in the cockpit to try and improve the situation?
MV: No, because I mean, I'm pressing the button, but the system is not opening. So this is not working. So we really have to fix that.

Q: We haven't seen you and George battle on track wheel-to-wheel in Formula 1. Just how much did you enjoy the fight with him?
MV: I was a bit frustrated at the time, because I couldn't get him because of the DRS issues. But the fight itself, I think was really cool. Also, I think that lap where I did go on the inside and then George went around the outside, but then I was on the outside of Turn 3 again, I think that was a really cool fight. Yeah, I look back at it and I'll smile now. At the time, of course, I was a little bit frustrated. But it was a really good and tough battle, I think.

Q: Sergio, coming to you. Well done, your third podium of the season. You're first here in Spain. Just how good was it on the podium when so many people were chanting your name?
SP: Yeah, it was great. My first podium here in Spain. They obviously have their two very good drivers, Spanish drivers, but I can say that I'm probably the third one in terms of support here because every year it's been amazing. And to be on the podium for the first time, it's nice, and great team result as well. We took our opportunities and very pleased with that.

Q: Great team result, as you say, but you did say over the radio on the slowdown lap that you do want to talk to the team about tactics. Did you feel the win was on today?
SP: Well, on the first stint, when I let Max by, I was told that I was going to get it back. And we knew we were on different strategies. So when I was back on it, I felt like I could have gone through and probably given a better shot at my strategy, to make it work. But at the end of the day, it turned out to be the three-stop the way to go today.

Q: Just tell us a little bit about the tyres and deg. How unpredictable was it out there today?
SP: Not very unpredictable. I think we kind of expected it to be this bad. So, it was not a surprise today.

Q: George, second podium of the many congratulations. First up. How good does this result feel?
GR: It feels great to be on the podium and I think it goes to show the hard work and effort that's gone on back at a factory, both in Brackley and Brixworth. We've always said that you got to be there at the end to pick up the pieces, and pick up points and especially on days like today it was incredibly tough out there for the cars, for the drivers. But I feel like we're making progress. And I think we, as a team, have turned a page. I feel like this is probably the start of our season now.

Q: And George, can we get a word from you on that battle with Max?
GR: Yeah, it was enjoyable. I mean, it's... I think Max and I first raced each other back in 2011. So it was nice to have the opportunity to fight with him. And, you know, I'm here to win, I'm here to fight and I obviously wasn't going to make it easy. I felt bad for him, because he obviously had the DRS issues and he was clearly the faster man today. But still, I think it was hard, fair racing. And that's what we would like to see, and expect, in Formula 1.

Q: How much were you having to manage temperatures throughout the race? Or was it just at the end?
GR: No, it was definitely when I was battling with Max, I was managing tyres, the engine was overheating, then trying to go as fast as possible to keep them behind. You're juggling so many things. And then in the last five, six laps, it was literally just bring it home, get it to the end of a race, because we were right on the limit throughout the whole race. But the team did a great job to not allow us to go over that limit and have to retire the car. Nobody enjoys these challenging races with really difficult temperatures but that can make a difference. And if you do a better job, you're there to see the rewards, so proud of everybody to bring this home.