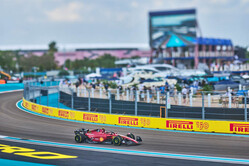 Despite the hype, the inaugural Miami Grand Prix was a loss maker, much to the surprise of co-promoter Tom Garfinkel.

Garfinkel, billionaire CEO of the Miami Dolphins and Hard Rock Stadium, co-promoted the event with Liberty Media, and with the event having sold-out - in every sense – in days, it was expected to generate a profit. However, this proved not to be the case.

Despite the support of the media, Miami-based Motorsport Network publishing endless articles eulogising the event before a wheel had even turned, the event came under fierce criticism from fans and drivers alike, while even many of the celebrities are understood to have been less than impressed, as were fans who attended the event, citing the poor facilities and service.

"If you would have asked me six months ago, I would have expected this to make money based on where the revenues were headed," says Garfinkel, according to Motorsport.com. "But based on where the expenses headed, we're not going to make one this year. However, it was very important for us to deliver a great event.

"The expenses far exceeded our expectations," he admits, "but it was because we were trying to do everything we could first class to be on brand for what F1 is and the kind of event we wanted to deliver."

While the event sold out (and how), organisers had opted to limit capacity to 85,000 though future races will see this increased.

"We certainly had demand to sell a lot more tickets," says Garfinkel, "but I want to get people in and out of here, concessions, bathrooms, and all of those things, to try to do that really well.

"We want to kind of see, are there any pinch points of pedestrian bridges where we need to do a better job? Are there any bathroom situations, concessions, traffic, etc that can be improved? So once we evaluate that, we'll know where we can grow.

"There's a lot of things we're learning that we think we can do better,” he adds. “And there's some things that are going really well. The feedback has been very positive, from the teams, drivers and F1, FIA. And the feedback we've got from the fans: there are certainly some things that I think we can get better. But, for a first time event, I think it's gone really well."