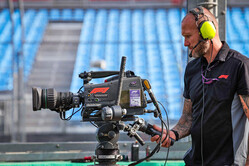 ABC's full telecast, which included the 90-minute Grand Prix Sunday pre-race show that aired from 14:00 until the race started at 15:30, averaged 2.1 million viewers.

This year's seasonal average of 1.4 million viewers is 53 percent larger than average of 922,000 for the first five races of the 2021 season. The 2021 season was the most-viewed F1 season ever on U.S. television.