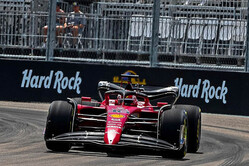 Finally, we can put the hype aside and focus on what most of us are really here for this weekend, on-track F1 action.

As has become the rule this year, the team have to advise of any upgrades they have brought to each race, and there for we can confirm the following:

Red Bull, AlphaTauri and Aston Martin appear to have brought nothing.

Air temperature is 33.5 degrees C, while the track temperature is 52.8 degrees. It is bright and sunny, as one would expect in Miami. That said, there is a 40% chance of rain.

The lights go green and Stroll has the honour of being the first driver to take to the track in an F1 car, closely followed by Latifi, Vettel, Norris and Bottas. Indeed, within moments there are 14 drivers on track.

There's an unsafe release for Ocon who almost collects Russell as he leaves his pit, the Frenchman appearing to ignore the calls from his engineer.

A fair mix of mediums and softs, though Magnussen is on hards.

Stroll posts a 39.513 to get things underway. Zhou and Perez both have lock-ups in Turn 1.

With 19 drivers on track, Schumacher yet to appear, Verstappen goes top with a 36.099, ahead of Norris, Leclerc and Gasly.

A number of offs including Verstappen, who touches the wall at Turn 15, while Leclerc spins in Turn 1.

There is a noticeable amount of marbles on the track just minutes into the session.

The stewards are investigating that unsafe released involving Ocon.

Quickest in the first two sectors, Leclerc posts a 33.440.

An incident involving Schumacher and Ricciardo, in which the Australian suddenly slowed and almost collected the Haas driver, has been noted. Indeed, it will be investigated after the session.

Gasly is lucky to avoid the wall as he experiences a huge slide in Turn 4, as onboard suggests that Ferrari is on top of its porpoising issue, certainly as far as Sainz is concerned. Indeed, the Spaniard goes quickest with a 33.163 on the mediums.

However, teammate Leclerc subsequently responds with a 32.949.

Another incident involving Schumacher, this time the German doing well to avoid Sainz as the Spaniard rejoined the tack after going off.

Stroll is given the black and white flag for crossing the line at the pit entry.

A 32.615 sees Norris go third on the softs, as Vettel becomes the second recipient of the black and white flag for pit entry naughtiness.

Leclerc is told he needs to go on the power earlier in Turn 1. The Monegasque noticeably using the sausage kerbs in the chicane.

With 25:00 remaining, Bottas is off at Turn 7 and has hit the barrier. "Sorry guys," he says as the session is red-flagged.

Replay suggests he was a little late on the brakes and carried too much speed into the fast left-hander before losing the rear.

Just before that, former teammate Hamilton had gone second with a 32.464 on the softs.

The session resumes with 16 minutes remaining. Sainz leads the way as most are now running on the softs.

However, the Spaniard has a massive lock-up and spin at Turn 4 and punctures his front-right tyre in the process. He subsequently pits and switches back to the mediums.

Quickest in the two final sectors, Verstappen goes top with a 31.350.

Though this is not a street circuit per se, traffic is already a problem and is likely to impact qualifying tomorrow.

Sainz improves to 5th (31.528) on the mediums as Ferrari appears to have the edge.

A late improvement for Gasly sees the Frenchman go fifth (31.498).