Porpoising is "not sustainable" for drivers, warns Russell 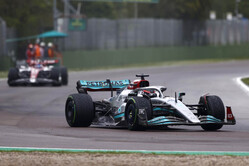 Admitting to having suffered back and chest pains from the effects of porpoising, Mercedes driver, George Russell warns that the phenomenon is not sustainable for drivers.

Though the W13 appears to be the worst affected, and certainly the most performance compromised, almost all the teams are experiencing the porpoising phenomenon one way or another.

However, other than the obvious effect on car performance, George Russell admits to suffering physically from the bouncing phenomenon and he doesn't think he's the only one.

"But the bouncing... it really takes your breath away," he admits. "It's the most extreme I've ever felt it.

"I really hope we find a solution and I hope every team struggling with the bouncing finds a solution, because it's not sustainable for the drivers to continue," he warns.

"This is the first weekend I've truly been struggling with my back, and almost like chest pains from the severity of the bouncing. It's just what we have to do to go and do the fastest laps."

Nonetheless, the Briton brought his W13 home in fourth, just 8s behind the last of the podium finishers, Lando Norris.