"I'm out of it," says Hamilton of title fight 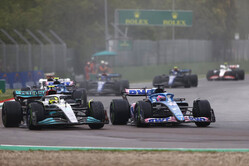 Finishing the Emilia Romagna Grand Prix in 12th, a lap down on the winner, Lewis Hamilton writes off his 2022 title chances.

It's hard to say what moment over the course of the Imola weekend represented the most stark indication of where Mercedes and Lewis Hamilton are right now.

There was that infamous exchange with Toto Wolff at the end of qualifying on Friday, then the distant run to 14th in the Sprint. On Sunday there were the 44 - count 'em 44 - laps he spent staring at the back of Pierre Gasly's AlphaTauri, not to mention the ignominy of being lapped by his nemesis, Max Verstappen, on Lap 40.

Little wonder then that come race end, the seven-time world champion was writing off his hopes of securing a record eighth this season.

"A weekend to forget, that's for sure," said Hamilton. "I'm out of it, for sure, there's no question about that, but I'll still keep working as hard as I can to try and somehow pull it back together somehow.

"It was so painful, there are no words for it really," he admitted. "We were hopeful we would get into the top ten and if we weren't stuck in the train we would have had the pace to get into the top then. But that wasn't possible today."

Clearly at a low ebb, despite the shortcomings of the car Hamilton accepts some of the blame for the poor Imola performance and apologised to his team.

"We're obviously not fighting for this championship," he said. "But we're fighting to understand the car and improve and progress through the year. That's all we can hope for right now.

"It's been difficult and it's definitely not easy, but we all feel it as a team," he added. "At least George got some points today for the team, so apologies to everyone that I wasn't able to do so.

"I think the team is, as I said, everyone is feeling it and everyone is head down, trying their best," he insisted. "I’ve definitely had lower moments, so it’s not the lowest, for sure. So there's no one that's giving up and everyone is just trying to move forward as fast as they can."

Of course, having dominated for so long, as his struggles continue, there were some only too keen to twist the knife.

"He was lapped by us," Helmut Marko told Sky Sports News after the racer. "Maybe he is thinking he should have stopped last year."

Meanwhile, Sky pundit and former teammate to Hamilton, Nico Rosberg appeared to be relishing the Briton's demise, never missing an opportunity to point out how badly the seven-time champ was doing, whilst pouring praise on teammate Russell.