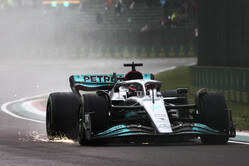 Both cars were eliminated in Q2, as the team struggled to generate tyre temperature in the damp conditions of Imola. George will start tomorrow's Sprint Race in P11 and Lewis in P13.

Despite lacking performance, a red flag towards the end of Q2 added to the team's difficulties, forcing both drivers to abort their flying laps while running faster than their previous times.

The rain intensified during the pause, leaving the team with no chance to return to track and improve their positions.

George Russell: We've struggled to get the temperature in the tyre in the first few races, we're always seemingly taking a bigger jump on the second lap. We saw that in Australia when we compare to the Alpines and the McLarens; they were a first lap qualifier, and we were on the third or fifth lap doing a fast consecutive sequence. It was a bit of a shame with how the red flags panned out today but if there is a weekend to not be where we want to be, a sprint weekend is the one to do it. Not ideal, but we've got the chance to make up positions tomorrow. The Sprint Race will be interesting with these new cars as we can follow a bit closer, but I don't think there's enough laps with enough degradation for us to use our advantage there compared to our current rivals. We've got the Sunday race as well and we can only go up.

Lewis Hamilton: Today wasn't a great session and naturally it's disappointing. We came here with optimism, everyone is working so hard at the factory but things just didn't come together. I think we underperformed as a team today. We'll work as hard as we can to move up in the Sprint Race. It's going to be a difficult race but who knows? Maybe we can move our way forwards. Each weekend is a rescue at the moment.

Andrew Shovlin: A difficult couple of sessions today; we have a car that doesn't generate tyre temperature sufficiently well and that has cost us today. We were moving towards a schedule of longer runs but with the red flags we couldn't get the laps that we needed and once the rain came, we were left in 11th and 13th with no chance to improve. This is not a great track for overtaking so we expect the rest of the weekend to be a challenge but we have shown that our race pace is better than our single lap and with both the sprint and the main race we have longer than normal to try and recover.