Mercedes holding out on upgrades 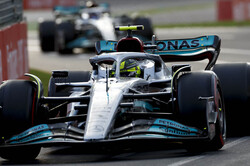 Toto Wolff admits that his team is resisting the urge to introduce upgrades due to the fear of "confusing" the situation.

In a masterpiece of damage limitation, despite its issues - of which, according to George Russell, porpoising accounts for 99% - after three races Mercedes is second in the constructor standings and the Briton is second in the drivers'.

As the European phase of the season gets underway, one would assume that the German team, like most, is looking at upgrades, however Toto Wolff admits that he is resisting such a move until the current issues are resolved, fearing that to introduce upgrades at this stage would only muddy the waters for his engineers.

"We're just learning the car, we're learning the tyres," says the Austrian, according to Motorsport.com. "Nothing we did this weekend has unlocked the aerodynamic potential or has reduced the bouncing.

"We're still at the same place," he admits. "And that's why it doesn't make any sense to bring updates, because you're confusing yourself even more.

"Maybe it's the fact the more downforce you bring, the worse the bouncing gets," he adds. "So we are still learning."

Of course, the team has benefitted from the poor reliability of the Red Bull, and Wolff is fully aware that this is a situation that may not continue, yet while he admits the Brackley-based outfit is currently 'riding its luck', he insists things can get better.

"If I look at it from a mathematical standpoint, in probability, I would probably say that the odds are two to eight," he says. "But this is motor racing and in motor racing, anything can happen. Teams can DNF and if we unlock the potential of the car, we are right back in the game.

"So, as a motor racer, I would say it's probably 40-60... as a mathematician, the odds are worse against us, but third race into the season we're not going to write the title off.

"It's just the current status quo, we are seven-tenths off."