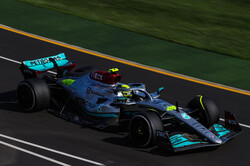 Finishing FP2 in thirteenth, 1.5s off the pace, Lewis Hamilton admits that "nothing we change on the car makes a difference".

As expected, and with his team having brought no updates, the porpoising issues experienced in pre-season testing and the opening two races are not getting any better, Lewis Hamilton, who, according to sites like www.betminded.com goes into the Melbourne weekend at 28/1 to win, while Charles Leclerc is 5/4 and Max Verstappen is 13/8, continues to struggle with the Mercedes W13.

Once again, out-paced by his teammate, the seven-time world champion's frustration was evident following today's sessions.

"Nothing we change on the car makes a difference at the moment," the Briton told reporters. "That's the difficult thing.

"You're getting very optimistic, and then you make changes, and then it doesn't seem to be wanting to improve," he added. "We made some changes going into P2. P1 was better. P2 ended up being a bit harder for me. So I don't know, it's just a tricky car.

"There's not a lot we can do," he admitted. "This is the way it is, so we just have to drive with it.

"It's probably the most severe I've experienced, but I think it's something we just have to deal with for the time being as we believe that's the fastest way around the track. But maybe it's not.

"We need to keep digging into the data and understand it. We've sort of gone from left, right and centre with the set-up, and it has all resulted in a similar outcome. So we need to try and get on top of things and understand why."