"We've got a lot of work to do," admits Hamilton 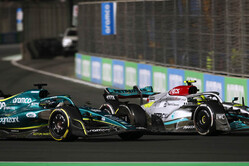 Crossing the line tenth, over a minute behind his 2021 nemesis, Lewis Hamilton admits that Mercedes has a lot of work to do.

Starting the race from 15th - courtesy of Daniel Ricciardo's grid penalty - Lewis Hamilton, one of three drivers to start the race on hard tyres, had worked his way up to sixth before he finally pitted on lap 40.

Kevin Magnussen and Nico Hulkenberg, the other drivers to start on the white-banded rubber, pitted on lap 37, the German making it into the pitlane in the moments before it was closed after Daniel Ricciardo and Fernando Alonso had stopped on track.

"Too late," sighed Hamilton as he was told to pit just moments after he had passed the pit entrance. Indeed it was.

Rejoining the race in twelfth, he was able to pick off Lance Stroll and Alex Albon in the final stages of the race to claim the last of the points.

"Personally, I feel like I maximised everything," said the seven-time champion. "I don't know if we did as a team, but it is what it is. We move on.

"It was a difficult one," he continued, referring to the aborted pit stop. "I saw Alonso slowing down, it was double yellow flags so I didn't push to overtake him, then Daniel was stuck in the pit lane so I didn't know if I could go in with the car just sitting there. It was just not great. Anyways, it is what it is."

Asked, what lessons have been learned for the weekend, he replied: "The learnings are that we are quite a bit off pace-wise, and we've got a lot of work to do.

"Right now we are not fighting for the top step," he continued, "we are still far off the guys who are ahead and we've got a lot of work to do. It feels like a long way away. We need more grip and we need more power.

"The end result was not great but the race was going really well," he insisted, "I felt relatively well on the hard tyre. I was keeping up with George and I think I put in some decent times and pace considering how old the hard tyres were and then the strategy at the end.

"I don't know if it was strategy or the virtual safety car, we lost out so much so I think we will keep working hard and keep fighting because that's all we can do.

"We are still really down on speed and on the speed trace," added the Briton. "I don't know if that is just one fix or several things, I don't know how much drag we have compared to the others, but it feels like a lot."

Indeed, with only three Mercedes-powered cars finishing in the top ten, the German manufacturer has its work cut out.