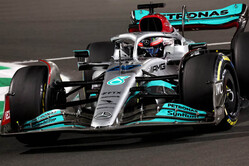 George qualified in P6, after a tense path into Q3, putting together a solid first lap of the final session but aborting his second flying lap. Lewis bowed out in Q1, after setup changes to his car fell short and he will line up for tomorrow's race in P16.

George Russell: We are one team, and as a team it was not a good day. We don't have a handle on the car at the moment, it's been inconsistent and we're fighting to get it into this very small window. On our side of the garage, we managed to get it just inside that window - I don't really know why or how - and unfortunately on Lewis's side they didn't manage to. When that happens on a circuit like this on a knife-edge, you just don't have the confidence to push it to the limit. As a team, we're not here to fight for P5 / P6, we want more and we were nine tenths behind Checo today, so we've got work to do.

We know what our issue is and everyone's working day and night trying to solve it. We know there's so much lap time on the table, we just can't tap into it. We will get there, I've no doubt. But we've got to be patient. We can be grateful that we've got such a serious issue, but we are still the third fastest team and that offers so much optimism. If we are still the third fastest and we have so many issues, when we solve them, we should be in a really good spot.

Lewis Hamilton: I hope Mick is OK, that corner is 170mph and it's terrifying to see what's happened - that's the biggest crash we've seen at this track. For me, I struggled with the balance of the car today, the rear end was snapping out and this isn't where we want to be. We went the wrong way with the set up tonight and the car just wasn't underneath me for this session. It's strange because the car was feeling good in FP3 but in qualifying, it was difficult to drive all of a sudden and felt nervous. Everyone is working as hard as they can and trying to stay positive. I'll try my best tomorrow and see what we can do.

Toto Wolff: That's the second race of the season and another confirmation that we are not where we want to be, and need to be. On Lewis's side we experimented with a setup that was worse, and the consequence was there was no rear grip and the car became undrivable. For George, I think today was a good effort considering we only had one soft tyre for Q3, so a solid job from him. Nevertheless, the optimum scenario for us today was the no-man's-land between the Red Bull and Alpine, and that's certainly not acceptable.

Andrew Shovlin: We know we aren't quick enough at the moment and Lewis exiting in Q1 is just a symptom of that. We struggled here on single lap pace, it was more of a challenge than Bahrain and we weren't fast enough in Bahrain. However, the car did look better in race spec yesterday than on single runs, so we're hopeful we'll have a better package tomorrow. We know the races here don't normally run to plan so there's lots of opportunity to move forward and we'll no doubt gain some useful knowledge along the way. George drove strong sessions and didn't leave much in the car today.

The porpoising is priority number one because it's preventing us from running the car where we want it. We've got some avenues which are giving us good direction but it's taking us time to get those as parts on the car. We're leaving no stone unturned and every day we run, we're learning.