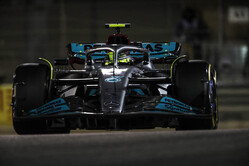 George went fourth quickest in the first practice session of the day, with Lewis in P7. Under the floodlights of FP2, George again set the fourth quickest time with Lewis's car suffering a DRS issue throughout the session, finishing P9.

The team experimented with a number of items designed to mitigate the bouncing issue affecting W13, collecting valuable data as the team looks to regain the downforce lost due to porpoising.

George Russell: It's all about lap time and we're certainly not where we want to be. We made progress on solving some of our issues but the pace isn't there at the moment. We need to go over the data tonight to understand where we're struggling with the car. We've got lots of work ahead of us to get the car where we want it but if any team can, we can. It was windier today than last week, you're running at different times of the day, plus we're trying lots of things on the car to improve performance, so there's so many factors for us to weigh up. We are truly throwing everything at it to unlock the performance which we think is there but we're struggling to tap into at the moment. We need to go away, do our analysis and make the best of this situation.

Lewis Hamilton: In the second session, my front two discs were at different temperatures, the left one running cooler and the right one coming up in temperature, so when hitting the brakes the right one was pulling the steering. It meant you didn't get the laps in so that wasn't great but it's not a massive issue and we can fix it.

The bouncing we're experiencing is losing us downforce compared to the others which is making it much harder out there. We're not bluffing like people assume we are but we'll work as hard as we can to get through it and do what we can. At the moment, we're not going to be in the race for the win here, Red Bull are 0.8/0.9secs ahead and Ferrari are half a second ahead so we're scrapping with whoever is behind them. I'm still calm, just trying to be the best I can be and get the best out of the car. It's not ideal but we'll pull together as a team to try and fix it.

Andrew Shovlin: Our first session made use of the fact that we had two cars for the first time this year and chose to run them in different specifications. That was a useful test and we got a clear read on which setup and floor specification was best for the bouncing. However, we're still struggling to get the rear of the car much lower and trying to do that gave the drivers a fairly bumpy time of it in the second session. In terms of pace, we have a significant gap to Ferrari and Red Bull, especially Max on the long run. There are some relatively easy gains we might be able to make overnight with the balance but we're not going to find more than a few tenths. More important is that we keep learning as we don't seem to have understood the bouncing as well as some of the others, it may also be that we're lacking a bit of car pace. So, we're expecting a tough couple of days where we need to focus on damage limitation but also continuing to experiment to see if we can find a better place to run the car.