Hamilton vows to be "more aggressive" 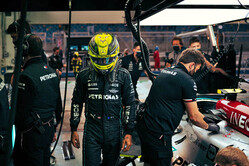 As his quest for an historic eighth title gets underway, Lewis Hamilton warns that he will be more aggressive this season.

Never one afraid to stick his elbows out and get stuck in, the Mercedes driver was involved in a number of controversial incidents with Max Verstappen as they battled for the title last season, most notably Silverstone and again at Monza.

However, as he seeks an historic eighth title, the Briton is adamant that there will be no easing off this time around, and he is determined to stamp his authority on the championship from the outset.

"I will be a more aggressive driver this year," the Briton warned at today's press conference. "You'll see," he subsequently added.

However, first his team have to overcome a number of issues, not least the porpoising that is still affecting the W13 and which was particularly noticeable during today's sessions.

"I'm hoping my guys have come up with some sort of solution going into this weekend and when I get in the car today it feels better," Hamilton had told reporters ahead of today's running.

"But I know there's not a huge change in such a short space of time, so we'll still most likely have some of the problems that we had last week. I don't expect we've made a huge amount of progress.

"The car naturally was fresher coming into the test: you have a new engine, you have new components. But it's still car from last week. We obviously have learned a lot from the week of testing here and I hope we've taken some sort of step forward in terms of understanding where we position the car.

"Mentally it's about making sure you are extracting everything in every other area," he continued. "All I can do is control how I'm performing in the car, just trying to be positive and knowing that we are all working together in the team.

"It is the best team and I'm very grateful for the group of people I have behind me, so confident we can make it through somehow."