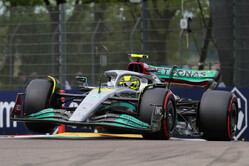 Mercedes boss, Toto Wolff has shed light on the 'exchange' he had with Lewis Hamilton in the final moments of Friday's qualifying session.

In the aftermath of Carlos Sainz' off, as the session was red flagged the rain began to fall and with no real hope of improving their times, none of the drivers outside the top ten opted to run again... among them Lewis Hamilton.

As we awaited the resumption of the session, the TV cameras picked up on an exchange between a helmeted Lewis Hamilton and a clearly angry Toto Wolff.

Asked about the exchange, Hamilton was giving nothing away, insisting that it was an "internal thing".

But that didn't stop social media... or the media.

'Hell is breaking loose after verbal confrontation between Hamilton and Wolff,' declared one headline, 'Wolff: Lewis vented at me, I vented at him,' ran another.

Indeed, it wasn't long before there was speculation over the futures of both at Mercedes.

Keen to end the speculation, Wolff admitted: "It's quite funny how it's been interpreted...

"Lewis and I shared frustration that we weren't really able to extract lap-one performance and how annoying it was," said the Austrian. "But it was basically the same point of view and just sheer anger.

"There is no division," he insisted, "and there is no blaming or anything like that.

"There's pressure in the system," he admitted, "but I would say the necessary pressure to get things right. Nobody in the team is anywhere near enjoying the ride at the moment. And this team, we've done it in the past and we just need to dig ourselves out of that hole.

"Being involved in this, we all have our good moments and our bad moments," he continued. "We have the optimism and pessimism but, as it stands, we have just came out of the debrief and it was really to say, what are the avenues which we need to immediately embark on?

"So I see no difference in that determination and passion for sorting this out and for getting ourselves back in the game for winning races and fighting for championships... that's exactly the discussion we just had 20 minutes ago.

"We are four races in and probably today marks the low of these first four races," he added. "It's obvious that we are not anywhere near the fight at the front. And it would be pretty unrealistic to claim to have a slot among the front runners for fighting for the championship."

"Point scoring has to be the minimum," he said, "but that is not where we set our expectations so and therefore this weekend is a complete write-off.

"So you can say we are trying to learn, but we weren't great with tyre warm up and that is why there was no miracles that you can expect at the race start and because the overtaking is so difficult.

"We can make up positions, we have shown that, but not quickly enough. Therefore, beyond the fact we are learning it is another humbling experience."