Each weekend is a rescue, says Hamilton 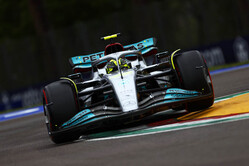 As Mercedes fails to get a car into Q3 for the first time since 2012, Lewis Hamilton admits that "each weekend is a rescue".

As the W13's porpoising issues continue, the seven-time world champion and his teammate struggled, their situation not helped when Carlos Sainz went off - thereby bringing out the red flag - at a time the track was almost at its optimum.

When the session resumed, and with the rain falling once again, neither driver opted to go out, and in the moments that followed the TV cameras appeared to catch Hamilton in a heated discussion with a clearly angry Toto Wolff.

"It wasn't a great session, naturally it's disappointing," he admitted. "You come here with optimism and you know everyone is working really hard at the factory, and things just don't come together.

"It's disappointing," he added. "I think we underperformed as a team today. There are things that we should have done that we didn't... Anyways... we'll work as hard as we can to move up in the sprint race. It's going to be a difficult race, but hopefully tomorrow is better weather-wise, and who knows, maybe we'll move our way forwards."

Asked if the Sprint offered hope of taking something away on Sunday, he replied: "We'll just keep working hard... each weekend is a rescue."

And asked about the 'incident' with Wolff, he said: "It is internal stuff, I'd rather not share that."