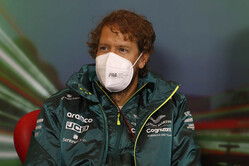 Drivers admit that they are unhappy with the new three-day format, feeling that they are now spending too much time answering the same questions.

In its determination to expand the calendar, and having failed in its bid to have the racing reduced to two days, F1 has instead focussed on the media side of things. This year, all activity takes place on Friday, Saturday and Sunday, with the drivers' official press conference moved to Friday morning and the team principals' to Saturday.

However, drivers still find themselves dealing with promotional matters and the media on Thursday, while on Friday, at a time they should be focussing on their cars and set-up they are called to the official press conference.

Feeling that this has actually increased the workload, the drivers' union, the Grand Prix Drivers' Association has raised the matter with the FIA, while Max Verstappen and Kevin Magnussen admit frustration at being asked the same questions over and over.

"I think it was better before," said Verstappen, "because now, our Thursday is very long, which officially is not really a day any more but actually for us is the same - or even more on a Thursday, and even more now on a Friday when you come in early.

"Coming in early is not a problem," he added, "but your whole day is longer. So, I... with going to more races you would like to have a shorter weekend - but actually now with more races we are also having longer weekends, or at least more days that we are actually at the track and doing stuff. So, yeah, that definitely needs to change."

"I agree with Max," said Carlos Sainz, "we are going towards more number of races but for some reason that maybe we didn't expect this year, both Thursday and Friday have become a lot longer for the drivers and the amount of media that we are facing every day, and the amount of time that we are spending at the track in meetings and activities has increased a lot, even as we are going towards a higher number of races. So, we are going to need to find a way to control this in a more efficient way, let's say."

"I've only been around for three years," added GPDA director, George Russell, "but I think between all of the drivers we are incredibly united and we've got a constant communication with Formula 1 and FIA to try to improve our sport in every single aspect.

"It's forever developing, forever changing and I don't think there's anything more to elaborate at the moment. I think it's important that between the drivers, F1 and the FIA, we've all on the same page and we're all pushing in the same direction."

Asked if he would prefer media and promotional activities restricted to Thursdays only, or even ban all activity making it a strict three-day weekend, Verstappen said: "I think it doesn't matter if it's all on Thursday or all on Friday. It's more about... we do this, then we go outside, then we have to speak to all the individual medias... but they all ask the same question, and you're basically repeating yourself six or seven times. And you try, of course, to keep it interesting, to try to word it in a different way - but at the end of the day you say the same thing, right?

"We see in other sports as well, when they have a press conference, there are a lot of mics just brought together and, instead of giving the broadcasters, like two questions each, they all have, basically, whatever, six, eight, ten questions, just in one go and they can all broadcast it. So, I think that's also way more efficient and nicer for everyone. It doesn't matter if you have 20 mics lined-up all from different companies. You get a lot more out of the drivers.

"We already know that, if we leave here, we have to go outside and we have to repeat ourselves at least six to eight times. And it's just... when you start, it's exciting, the first two, when you continue to the other ones, it's going to be boring. It's not nice for them, it's not nice for us. So, I think we can be a lot more efficient with that."

"If the reason for the change was to make the weekend shorter that certain certainly hasn't worked," said Kevin Magnussen. "For me, that's okay. My problem with it is that you go through a lot of interviews in a weekend. And it's hard because you're answering the exact same question. So although it's about the subject that you're very excited about, that wears off, through Thursday and then into Friday, and you know, it becomes a bit hard to be authentic at the end, when you've answered the same question 30 times. But you know, it's not really up to me."

"I think we should consider it (going back)," added Alex Albon. "We've done what we've done to reduce the load on everyone. But at the same time, it seems that we've created more load. And it does seem on Fridays, especially right now, we would love to be talking with engineers and getting ready for a very busy weekend. But instead we have media duties, which is fine.

"But then on Thursday we were also pretty busy. And it hasn't really changed Thursdays. So I think, for us, we will have a discussion and see where we can improve things. I think it benefits everyone as well for it to happen."

"Kevin hit the nail on the head," said Sebastian Vettel. "The incentive was to make it shorter, it hasn't worked. So I think we need to improve. We can improve. The main thing is you want us to be excited if you have the same questions for an hour, it's not going to be. I think we've been all been to the TV and basically our excitement is not at its peak. I don't know I think we need to find a better way."

Asked about the GPDA's letter to the FIA, the four-time world champion said: "At this stage I'd prefer to not disclose any details. I mean, no big secrets, but obviously, it's fairly normal, you know, if I remember the last couple of years, there's always been some points, various natures - weekend format, safety, the tracks, calendar, lots of things that we addressed.

"We've always been in contact with both FIA and FOM," he added. "And it's no different this year, from our side, we've been sending a couple of things filled with questions and on some things we are still waiting for an answer.

"Maybe it's a busy period for the FIA. But, I think the subject, there are no big secrets. But the first attempt is always to keep it sort of disclosed (sic). And then yeah, we'll see what happens with it."