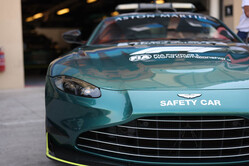 Aston Martin and Mercedes provide the safety and medical cars at Grands Prix on an alternating basis, and at the Australian race it was the former's turn.

While the Aston Martin race cars were having the weekend from hell, with Lance Stroll and Sebastian Vettel suffering all manner of calamities, in the eyes of some the safety car fared no better.

As he and his fellow drivers sought to generate heat into their tyres Max Verstappen complained that the safety car was not going fast enough for him to effectively generate sufficient heat, consequently his post-race description of the green Vantage was hardly flattering.

"There's so little grip," said the Dutchman, "and also the safety car was driving so slow, it was like a turtle... unbelievable!

To drive 140 (km/h) on the back straight, there was not a damaged car, so I don't understand why we have to drive so slowly," he added. "We have to investigate.

"The Mercedes safety car is faster because of the extra aero, this Aston Martin is really slow," he continued. "It definitely needs more grip, because our tyres were stone cold.

"It's pretty terrible the way we are driving behind the safety car at the moment."