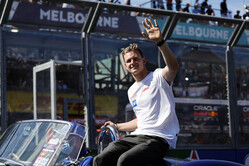 Following an incident during today's Australian Grand Prix, the Melbourne stewards have called for a review of safety car protocols.

At race end, Mick Schumacher, Pierre Gasly and Yuki Tsunoda were all summoned by the stewards following an incident behind the safety car which almost resulted in a collision.

The three drivers were in line on the main straight behind the safety car and were accelerating and decelerating to keep their tyre and brake temperatures up in anticipation of the restart.

Gasly slowed in reaction to the car in front, and his teammate also slowed in reaction. Schumacher was clos to Tsunoda as he slowed, while trying to maintain the ten car length maximum separation specified in the regulations, and had to move left and overtake the Japanese driver while braking to avoid colliding with him.

The stewards found no driver guilty of breaching the regulations however, they feel it is clear that the speed and braking capabilities of F1 cars, especially while trying to maintain required temperatures in tyres and brakes, are in tension with the ten car length separation behind the Safety Car traditionally specified in the regulations.

"There needs to be a point of emphasis in future driver briefings, to ensure the drivers collectively agree on how best to address this challenge before an unfortunate incident occurs", said the stewards.

Meanwhile, the stewards felt no further action was required after it was alleged Kevin Magnussen had forced Fernando Alonso off track in the closing stages of the race.

After the Dane had passed Alonso at turn 3, the Spaniard had a run and was attempting an outside pass on the Haas going through turn 4.

The cars went through turn 4 essentially side by side but at the exit Alonso was off the track.

The drivers agreed that this was hard racing with no clear breach of the regulations - a claims with which the stewards agreed as they opted to take no further action.