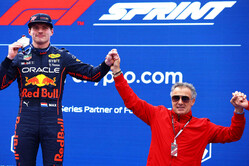 With points for the first eight finishers this year, the Sprint, whatever one might think of it, takes on a little more meaning.

Hopefully, today's Sprint will be as F1 bosses intended, yesterday's various incidents having provided a fairly mixed up grid which ensures those drivers out of position will have to overtake or risk missing out when it really counts tomorrow.

Verstappen starts from pole, ahead of Leclerc, Norris, Magnussen, Alonso, Ricciardo and Perez, a mix that on its own should be worth the price of admission, but add in Russell and Hamilton starting from 11th and 13th, sandwiching Schumacher, and just behind Sainz, Vettel sand Bottas and you can see that we might be in for some fun and games.

Scheduled for 21 laps, or one hour, there are no mandatory pit stops, consequently, with no sign of rain, the start will be all-important.

Despite the Ferrari's advantage at previous races, this weekend the Maranello outfit hasn't quite nailed it, and while this must play into Red Bulls hands (hooves?) there is the question mark over reliability.

While there is the obvious question in terms of damage limitation, we must not forget that this is not the main course, for tomorrow is when the big points are available, consequently nobody can afford to take any unnecessary risks.

Fact is, it's all about risk and reward, especially at a time teams are already feeling the effect of the budget cap. Sprint versus Grand Prix aside, we are barely four races into a twenty-three race season, and mishaps now, or in the coming weeks, could come back to bite hard in the latter stages of the year.

As the drivers make their way to the grid, the air temperature is 21 degrees and the track temperature is 29 degrees, slightly different to yesterday. That said, race control warns of a 40% chance of rain.

All are starting on softs bar Magnussen, Schumacher and Latifi who are on mediums. A big gamble by those three.

They head off on the formation lap, Alonso is slow getting away but eventually takes up his position.

Verstappen backs up the field as he approaches the grid, Albon the last to take his place.

Latifi warns that there is smoke pouring from the brakes on the Alpha in front (Gasly).

Into Tamburello and Magnussen is on the inside of Ricciardo, the Australian loses ground and is passed by Perez also, right behind, Alonso and Sainz are side-by-side.

Out come the yellows as Zhou is off at Piratella. The safety car is deployed as it revealed the Alfa driver clashed with Gasly.

Gasly pits at the end of lap for a new front wing.

The stewards have noted the Zhou/Gasly clash and Magnussen and Perez for weaving on the straight.

The safety car is withdrawn at the end of lap 4.

Leclerc unleashes the full power of the F1-75, as Sainz is under pressure from Vettel.

Magnussen is given the black and white flag for weaving, while Alonso loses ground after hitting the kerb at Tamburello.

Leclerc and Verstappen trade fastest sectors, as Perez pressures Magnussen, as he builds a 1.7s advantage over Alonso who has Sainz in hot pursuit.

Perez sweeps past Magnussen to take fourth, a combination of the Red Bull's sheer pace, DRS and the fact that the Dane is on mediums.

Hamilton passes Stroll for 14th, as Norris falls 5s behind the leading pair.

Bottas closes on Vettel, with Schumacher also closing in.

Bottas passes the Aston Martin for 9th, the Finn's next target being Alonso.

After 9 laps, Leclerc leads Verstappen by 1.3s, as Perez harries Norris and Magnussen fends off Ricciardo and Sainz.

In clear air, Perez goes quickest in S1 as Sainz reels in Magnussen. Sure enough, despite the porpoising, Sainz sweeps by Magnussen on the run to Tamburello.

Under pressure from Bottas, Alonso closes on Magnussen.

At the start of lap 14, Sainz picks off Ricciardo with ease, as the Spaniard claims 5th. However, fourth-placed Norris, who is 5s up the road, appears to be out of reach.

Bottas is all over Alonso on the run to Tamburello, with Magnussen just 0.4s ahead.

A new fastest lap from Perez (19.012) as the stewards note Alonso and Bottas for weaving.

Schumacher makes a nice move on Vettel to claim 10th, while Alonso is shown the black and white for weaving. To add insult to injury the Spaniard is subsequently passed by Bottas.

Suddenly, Verstappen is 0.5s down on the leader, as Sainz closes on Norris.

"Leclerc is showing signs of graining on his front-right," Verstappen is told.

Verstappen turns up the wick, but Leclerc soaks up the pressure.

At the start of lap 19, Verstappen gets tantalisingly close to the Ferrari at Tamburello, but still its not enough.

"Leave me to it, leave me to it," shouts Verstappen as his engineer give his advice. Sure enough, the world champion subsequently goes around the outside of the Ferrari in Tamburello.

In the final points position, Magnussen is just 0.7s ahead of Alonso.

"Please, do not talk in the braking," shouts Verstappen.

"We needed to minimise the damage from yesterday," admits Perez. "Today we managed to recover so we should be in the fight tomorrow.

"It's still a front row start," adds Leclerc, "we struggled with the tyres at the end, we need to analyse that.

"We will work and come back strong tomorrow. Every time we are in Italy we have so much support, it's amazing."

"I think we were better on our tyres at the end," says Verstappen. "It was fast, I was pushing quite a bit."

Useful points for Sainz see the Spaniard go second in the championship, while Red Bull leapfrogs Mercedes in the team standings.

As Verstappen said, it was fast... and somewhat furious... indeed, it is interesting to note that as Liberty increasingly looks to street circuits, it is the classics like Imola, the Red Bull Ring and Interlagos - which host this year's Sprints - that provide the action, not to mention the passion.