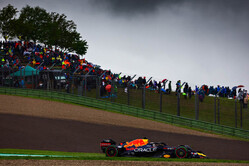 While the rain stopped after FP1, the cold conditions mean the it remains damp, while there is also the threat of further downpours. Indeed, it will come as no surprise that the F2 and F3 sessions held over the break were filled with incidents.

The teams will have been working hard over the break, but the conundrum they face is whether to focus set-up on qualifying, tomorrow's Sprint or Sunday's race.

Ahead of this session, the conditions are different to FP1 which only adds to the engineers headache as they try to decide which way to go.

Air temperature is 12.6s degrees C, while the track temperature is 15.2 degrees. Though it has stopped raining, and there is 'only' a 40 chance of further rain, the session is declared wet.

The lights go green and unlike earlier there is a rush to work with Latifi leading the way. While most are on Inters, including the Mercedes pair, the Alfas are on softs.

Soon all bar Alonso and the Ferraris are on track.

With the Alfas having shown no sign of struggling, the rest make the switch to the red-banded rubber.

Problems for Albon who has flames leaping from his right-rear brake, which subsequently explodes leaving debris on the track.

The session is red-flagged even though he is able to make it back to the pits.

Consequently, Albon will start the Sprint from 20th, as he did the Grand Prix in Melbourne.

The session resumes with 12:06 remaining. Ocon heads the understandably long queue at the end of the pitlane.

As has become the norm, at the end of their out lap the drivers slow in order to create a gap, thereby forming the inevitable jam.

A 21.363 sees Alonso go top as th timing sheet lights up with greens and purples.

Verstappen goes second, ahead of Ricciardo, with Norris crossing the line at 21.232.

Schumacher takes a wild ride over the Variante Alta, as Verstappen splits the Ferraris with a 20.349.

Latifi, on an out-lap, has spun at Turn 5 as Williams nightmare session continues.

Zhou goes fifth (20.548), as Hamilton slides towards the drop zone.

Verstappen and Sainz are trading fastest sectors. The Spaniard goes top with a 19.305 as Magnussen goes third (20.147).

Vettel goes eighth but is demoted by his Aston Martin teammate.

"How far we off man, it's crazy," says Hamilton.

Q2 gets underway and Sainz is first out, followed by Schumacher, Norris and Vettel.... As Leclerc is told he has "one timed lap before the rain arrives at Turn 4.

All 15 drivers are on track... all shod with softs.

An 18.793 sees Verstappen go top, as Alonso goes fourth, ahead of Magnussen and Vettel.

Russell can only manage 11th and Hamilton 13th.

Sainz is off and stuck in the gravel after losing the rear in the second Rivazza.

The clock is stopped with 10:42 remaining, Russell, Schumacher, Hamilton, Zhou and Stroll comprise the drop zone... as the rain begins to fall.

The clock ticks down but with the rain falling and the dry line disappearing it is clear that there will be no improvements in the time remaining.

With just over two minutes remaining, Leclerc, Alonso, Vettel, Perez and Bottas head out even though all three are now through to Q3. Clearly they want a wet run ahead of the final phase.

Meanwhile, in the Mercedes garage there is an animate conversation between Toto Wolff and Hamilton, the Austrian not looking at all happy.

We lose Russell, Schumacher, Hamilton, Zhou and Stroll... both Mercedes out.

Q3 gets underway and Inters are clearly the order of the day, though it has stopped raining.

Soon all nine drivers are on track, Sainz, of course, sidelined following his earlier off.

"The track is much drier than I thought," reports Leclerc. Meanwhile, Verstappen runs wise at Tamburello.

Magnussen is off at Acque Minerale, and as he struggles to get going again the session is red-flagged.

Replay shows the Dane getting his front-left on the white line... which is all that's needed.

The session resumes with Alonso leading Magnussen and Bottas out on to the soggy Imola track.

Alonso goes quickest in S1, but ruins it all with a mistake in the infamous Acque Minerale.

Alonso and Perez have their times deleted for exceeding the track limits at Turn 13.

Verstappen retakes the top spot with a 27.999 as the session is red-flagged after Bottas goes off and hits the barrier on the approach to Rivazza.

Verstappen is keen to allay his engineers fears that he lifted-off as soon as the flags appeared. "I did a massive lift when the yellow flags came out," he assures them.

As we await news on when the session will restart, it begins raining again.

Verstappen is at the end of the pitlane with Leclerc tucked right up his exhaust. As the lights go green the Monegasque attempts to pass the Red Bull but without success.

"Try and pass Verstappen if you can," he is told, which was clearly the youngster's intention.

"I have no grip, mate," reports Verstappen.

As Verstappen begins his flaying lap the session is red-flagged again as Norris is off and in the barrier at Acque Minerale.

So, Verstappen will start the Sprint from pole, ahead of Leclerc, Norris, Magnussen, Alonso, Ricciardo, Perez, Bottas, Vettel and Sainz.

"I'm happy," says Norris, "I'm top three which is quite a surprise for us.

"There was a lot left but I pushed too hard on the out-lap," he admits. "There was a possibility for us to have a go at Charles, the car was feeling good and I was feeling confident.

"These conditions made a big difference for us today, if it was completely dry, we wouldn't be in third place."

"It was very tricky, especially on the slicks," adds Leclerc. "It was all about putting the laps in and waiting for Q3 to put everything together. P2 is not a disaster, everything to play for tomorrow and we'll give it everything."

"It was tricky out there," says Verstappen, "dry, rain, very slippery. It was hectic, a long qualifying, but at the end I'm very happy to be here.

"It's a great track, I know tomorrow and Sunday will be different in terms of weather conditions but a great start to the weekend."