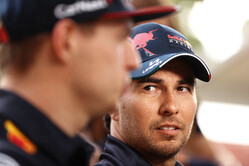 Max Verstappen: "I'm looking forward to racing again this weekend in Imola, this is obviously the first sprint race of the year so it's important to make the most of the first practice session, so we have a good understanding of where the set up needs to be for qualifying on Friday. The Team trackside and back at the factory in Milton Keynes are working incredibly hard, hopefully we'll have a straightforward weekend and that we score some good points as a Team. For now, we'll take it race by race and we'll see where we end up."

Sergio Perez: "I am looking forward to getting back in the car this weekend. It was a mixed few days in Australia for the Team but for me I managed another consistent weekend, after my pole and fourth place in Jeddah. I am pleased with how I have been performing so far and getting on the podium for the first time this season in Melbourne was a step in the right direction but I won't stop there, I need and want to be there weekly for the Team and for myself. We go back to the sprint format this weekend and I will be aiming to pick up the most points possible. That all comes from a good qualifying performance on Friday, and I hope to hook it up again in Italy. It looks like it could rain this weekend so that will play a part and I want to learn from the performance I had in Imola in the wet last season and continue to improve in all areas."

• After the first three races this season, Oracle Red Bull Racing and Ferrari are the only teams to get both cars into Q3 at every round so far. Max now has the longest continuous run of Q3 appearances, a run of ten in a row.

• Checo ended the longest-ever wait for a front row appearance when he qualified second on the grid at the 2021 Emilia Romagna Grand Prix with Red Bull Racing, his 193rd race start.

• Max was the joint-top scorer in sprint qualifying last season with 7 points, tied with Valtteri Bottas. With the expanded scoring system this year, there are more points than that available for winning the sprint qualifying (8 points).

• The Wednesday following this race will be Dr Helmut Marko's 79th birthday. He made his F1 debut at the 1971 Austrian GP - the same race as his compatriot Niki Lauda, whom he outqualified - and started nine Grands Prix before injury prematurely ended his driving career.

• Emilia-Romagna not only has its own Grand Prix, but it is even has its own language, Emilian-Romagnol, considered a relative to Lombard, Piedmontese and Ligurian among the Gallo-Italic languages. It can be found in UNESCO's Atlas Of The World's Languages In Danger.