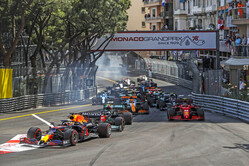 Zak Brown believes that the addition of Las Vegas to the F1 schedule could signal the beginning of the end for Monaco, long considered the sport's jewel in the crown.

The long-awaited announcement finally came on Thursday, as Las Vegas joined the Circuit of the Americas and Miami as hosts of rounds of the Formula One World Championship in Liberty Media's back yard.

Las Vegas, like Miami, will be joint-promoted by Live Nation, which is owned by Liberty Media, and represents a major gamble for the sport's owners.

Putting it simply, Live Nation - ergo Liberty - is carrying the risk and will reap the rewards if the events prove a success... though, equally, should the events not prove a success it will pile more pressure on the American company as it seeks to offload a sport that has never reaped the financial rewards expected.

Confident that the event will be a success, McLaren's Zak Brown believes that in time the Las Vegas race will threaten the future of Monaco.

"Monaco always stood for the most glamorous part of Formula One," brown tells Reuters. "I think Miami, Singapore, Las Vegas are starting to add some pretty glamorous markets.

"I think Monaco needs to come up to the same commercial terms as other grands prix and also maybe needs to work with ways they can adapt their track because as our cars have become bigger, the racing has become more difficult," he adds.

"It looks very proper and all the right people are behind it," he says of the Las Vegas event.

Asked about the fact that the race will be held on a Saturday, he responds: "We want to respect the history of the sport but there's not many sports that haven't changed in recent times to adapt to a changing world. I think a Saturday night race in Vegas is the obvious thing to do.

"I think these are three awesome markets," he adds. "I think it's almost the perfect schedule from an American standpoint."

Asked about Stefano Domenicali's claim that there could be as many as 30 races a year, Brown admits: "If you could wave a magic wand I'd like to see something like 21 or 22 races. Seventeen or 18 as permanent fixtures and seven or eight that rotate because I do think to continue to grow the sport the more quality markets we can be in the better. I'd love to see us be in 30 markets but race 21 or 22 times a year.

"I think there are A markets and B markets that we race in, maybe your B markets (should be) every other year."

Previously, Monaco had a 10-year deal with hosting fees of an estimated £4.5m ($6m) a year. However, this deal ended last year and the terms or even the length of the new deal are not known.

That said, if it had been a long-term deal with a sizeable hosting fee F1 would have been shouting about it from the rooftops, so one can assume that it's possibly just for a couple of years.

On the other hand however, Monaco remains the jewel in the crown as far as the teams are concerned, not so much for the racing but because it is where some of their best commercial deals are agreed.

Indeed, there is talk that Monaco was used by F1 bosses as leverage in its negotiations with the teams, who were given the stark choice, 'agree to an additional race or we drop Monaco'.

Ever the marketing man, Mr Brown appears to be doing Liberty's bidding though he will know from experience the true value of the Mediterranean venue.

While Monaco has unfortunately become the playground of various dubious oligarchs in recent years, it retains a certain glamour, whereas Las Vegas couldn't even tempt Adelle.