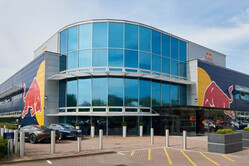 For the second time this week outsiders must feel the sport is enjoying a rare period of entente cordiale, as Mercedes and Red Bull Powertrains reach agreement on the Austrian manufacturer's new technical director.

In April 2021, it was announced that Hodgkinson was to join Red Bull Powertrains in a key leadership role heading up all technical aspects, with a key focus on developing its inaugural power unit, to comply with the new regulations planned for 2026. However, there were no details as to his proposed start date.

Starting his HPP career in 2001 as design engineer, over the next two decades Hodgkinson rose through the ranks, eventually being appointed ICE Team Leader in 2016 and Head of Mechanical Engineering a year later.

Understandably reluctant to let a man of his experience go, not to mention the bitter fight Mercedes enjoyed with Red Bull throughout 2021, yesterday the German manufacturer and Red Bull issued a brief joint statement confirming that agreement had been reached.

"Mercedes F1 and Red Bull F1 today reached an agreement regarding the appointment of Ben Hodgkinson," it read.

"Under the terms of that agreement, Ben, who joined Mercedes in August 2001, will be free to join Red Bull Powertrains from 24 May 2022."

Adding to the German manufacturer's frustration is the fact that Red Bull poached a number of its high ranking personnel including Omid Mostaghimi, Pip Clode, Anton Mayo and Steve Brodie.

Indeed, at the time Red Bull was snapping up Mercedes talent, former HPP boss, Andy Cowell, the man widely recognised as the main architect of Mercedes phenomenal hybrid power unit success, was said to be on Christian Horner's 'shopping list', though this was denied.