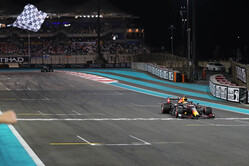 It is understood the FIA has begun the promised investigation into the events in Abu Dhabi, with its findings due to be revealed early next month.

In the aftermath of the season finale amidst worldwide outrage at the events of those final laps and what followed, the sport's governing body promised a "detailed analysis and clarification", admitting that what had happened was "tarnishing the image" of F1.

Days later, hours into his new role as FIA president, Mohammed Ben Sulayem promised that lessons would be learned.

"We will look into the rules and we are sure that, if any situation like this occurs in the future, we will have an instant solution for it or avoid it even," Sulayem told reporters.

"There are many areas that we can improve," he admitted. "We cannot just sit and say we are good. No, it's not enough in a sport as heavy, I would say, and as important.

"There is always a place for improvement," he continued. "We just have to look where can we improve. If you talk to me about the credibility of the FIA, yes, we lie on good structures, and good teams."

Referring to calls to sack race director, Michael Masi he said: "Why do we jump? We'll have to actually look into the matter. I definitely will not just jump to a conclusion on decisions without going back to my team. I have a meeting with the staff, and I will look into every single matter that can be improved."

The investigation, which will be headed by Peter Bayer, the FIA's secretary general of motor sport, got underway on Monday and it is anticipated that its finding will be made public early next month, in time for the meeting of the World Motor Sport Council on 3 February.

While Mercedes withdrew its intent to appeal the Abu Dhabi stewards decision, still insisting that "the way things unfolded was not right" and that it had originally protested the race result because the "safety car regulations were applied in a new way that affected the race result", in recent days it has been claimed that in a bid to placate the German team certain assurances were given.

The exact nature of these assurances is not known, but some are claiming that replacing Michael Masi was part of 'the deal'.

Meanwhile, the BBC has since claimed that Lewis Hamilton's decision on whether he races this year depends on the outcome of the FIA's investigation.

The big problem here is that the FIA is essentially investigating itself, for it is a senior FIA official at the heart of the issue.

Media headlines claiming that Masi - and Nikolas Tombazis, the governing body's head of single-seater technical matters - are to be sacked are already doing the rounds, but surely firing Masi would be an admission that the sport got it wrong thereby leaving the way open for a legal challenge from Mercedes.

At the same time, with his career effectively destroyed, it is unlikely that Masi would take things lying down, and other than his own legal challenge, might well turn to the media in order to tell his side of things, especially if, as many suspect, he was under 'external pressure' in terms of certain decisions.

In the wake of Charlie Whiting's death, Masi and Tombazis effectively shared his role with the Australian responsible for the sporting regulations and the Greek for the technical regulations. Interestingly, there is already talk that Austrian, Bayer, the man leading the Abu Dhabi investigation, would adopt these roles.

At a time Sulayem is promising to clean up the sport, one of his first actions will be to prevent in-race lobbying from teams, however if some of the recent media claims are to be believed Mercedes is still lobbying, and in terms of Hamilton's future in the sport - a future that Liberty Media and the likes of Netflix dearly needs - is effectively holding a gun to the FIA's head.