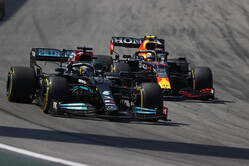 2016 world champion, Nico Rosberg has warned that the sport must tighten the rules if it is to avoid further controversies like those witnessed this season.

While the events of the final lap(s) at the Yas Marina circuit immediately spring to mind, one must not forget previous incidents at Interlagos and Jeddah.

In Brazil, as Lewis Hamilton attempted to go around the outside of Max Verstappen in Turn 4, the Red Bull driver went wide, thereby taking his title rival off-track with him. However, the stewards deemed no further action was required.

At Jeddah, at the first restart, Verstappen went around the outside of the Mercedes in Turn 1 and effectively cut the corner to take the lead. On this occasion the Dutchman - following much negotiation between the teams and race director, Michael Masi - was required to start from third on the grid for the second restart.

However, later in the race, on lap 37, as Hamilton sought to pass the Red Bull, Verstappen took him all the way into the corner and ran wide, rejoining the track still ahead of the Mercedes.

The Dutchman was told to hand the position back to the Briton but as he subsequently slowed the Mercedes ran into the back of the Red Bull.

Finally, in Abu Dhabi, both drivers ran wide at Turn 6 on the opening lap, taking to the run-off Hamilton rejoined the track with a noticeable advantage over his rival. Though the Briton 'slowed' in a bid to give back some of the advantage gained, it was widely regarded as negligible.

Again, the stewards deemed that no investigation was necessary.

2016 world champion, Nico Rosberg says that with the election of Mohammed Ben Sulayem as FIA president, the sport's governing body must get a grip.

"Big respect to Jean for his career of course, but now with a new person there's an opportunity really, because the sport needs to make progress," he tells Sky Sports.

"It starts with all the overtaking," he continues, "the wheel-to-wheel action, because let's not forget also in the (Abu Dhabi) race that in the beginning of the race Max passed Lewis and then kind of pushed him off a little bit and Lewis stayed flat-out, cutting the corner, and then came out in front again. Even that, all of us experts were like, ‘Lewis should probably let Max by here', and yet they didn't ask him to.

"The FIA needs to tighten all that up so that we don't have all these discussions," he warns." It would be better for the sport if it was much easier to understand.

"Also in wheel-to-wheel racing; who is now right and wrong, what needs to be done. A quick decision is made, and we go on. We need to get rid of all these discussions, that's important."

Of course, there were many such incidents over the course of the entire season, and while most involved the title protagonists, as the season developed others appeared to be getting in on the act as the stewards appeared to dither over what was allowed and what wasn't.