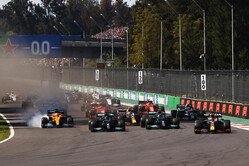 Pleased with the recently announced plans for the 2026 engine formula, Audi hopes to confirm its F1 entry "early next year".

Last month, Thomas Laudenbach, the vice-president of motorsport at Porsche, which like Audi is part of the Volkswagen Group, admitted that the terms on which the manufacturer would enter the sport were "coming true".

In the wake of last week's confirmation from the FIA that the next generation of F1 engine, due to be introduced in 2026, will witness a "shift of focus to electrical power", Audi CEO, Markus Duesmann and Oliver Hoffman, a member of the Board of Management of Audi AG Technical Development, have written to the sport's governing body expressing their satisfaction at the news.

Autocar cites a letter from the pair in which they assure Jean Todt: "Thanks to your efforts we are now close to the finish line.

"Recently, we saw another milestone being reached, the first draft of the technical, sporting, and financial regulations", they add. "We believe that it contains satisfying solutions for all the objectives".

The letter ends: "We look forward to working with you and your team, to complete this important process and to confirm our Formula 1 entry early next year."

Following last week's meeting of the World Motor Sport Council, at which it validated the framework for the 2026 power unit regulations four key objectives were identified. They were that the sport needs to send a powerful environmental message, with 100% sustainable fuel, overall efficiency, and a shift of focus to electrical power. Also, significant cost reduction, in terms of the technical, operational and financial regulations, the ability for newcomers to join the sport at a competitive level and 'protecting the show', in terms of a powerful and high-revving power unit, car performance, sound, drivers’ ability to race and avoiding excessive differentiation.

In order to achieve this, the 2026 power unit regulations will be built on four so-called pillars. These are the retention of the 1.6-litre V6 engine, increasing electrical power to 350kW, dropping the MGU-H and the introduction of a power unit cost cap.

With Porsche and Audi both expressing interest it is unclear which brand Volkswagen will give the green light to, however only last month, Williams CEO, Jost Capito, who was previously boss at Volkswagen motorsport, said the manufacturer is serious about entering the sport.

"If they have been serious, they have been part of the engine regulation discussions, I don't think they waste their time in going to these meetings, especially also the CEO coming to those meetings, and not being serious," he added.

"But finally, it depends on what the final regulations are if then the Volkswagen Group thinks it makes sense, they might go to the board and ask for a decision."

Seemingly, last week's news from the FIA has ticked all the right boxes.