Lewis keeps us guessing as the drama continues 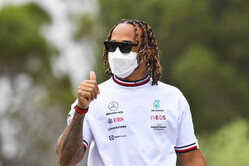 Just in time for the Christmas break, Bernie Ecclestone spoke to the media claiming that Lewis Hamilton will not be returning to the F1 grid this season.

"I don't think he is coming back," he told German tabloid Blick, "I think he will not race next year.

"His disappointment in Abu Dhabi was too great, and I understand him," added the former F1 supremo. "Now tied for seven titles with Michael Schumacher, it is the perfect time for him to fulfil his dream and be a fashion entrepreneur.

"A couple of days ago I spoke with his father," he revealed. "I realised immediately that he did not want to talk about the future of his son, so we just talked about business."

While not exactly poo-pooing the claim, Toto Wolff has responded to another German media outlet, admittedly one dedicated to motor sport as opposed to sensationalist clickbait.

"We are all wavering in emotions and Lewis most of all," he tells Motorsport-total.com. "He was winning the world championship until the last lap, and then everything is taken away from you in an instant.

"Of course, you lose faith because you can't understand what has just happened," he adds. "The silence is there, of course, because he simply lacks words as well.

"Lewis was in the office with me and everyone else involved, and we were also in constant contact over those days," he continues, referring to the days leading up to the protest deadline and the FIA prize-giving, not to mention a certain ceremony at Windsor Castle. "In the afternoon, we were back in video calls to decide what to do.

"What I told him before was that he should take those few hours paying homage to his life's work so far and his performances, that he should try to take those positive moments with him. I think that's what he did. You could see that too, how honourable that was for him."

Of course, Bernie's comments - or rather the publication of them - was perfectly timed, for over the Christmas break none of the key players were available.

After all, not only was it the Christmas break, the fact is that the sport was coming out of one of the busiest schedules in its history and about to head into an even busier period, one featuring a (hoped for) game changing shake-up of the rules.

Adding to the drama is the fact that in recent days, Hamilton has maintained radio silence, apart from deleting those he followed on Instagram, a move guaranteed to get tongues wagging and mice clicking.

On social media, fans of Hamilton jumped to the seven-time world champion's defence, while the likes of Christian Horner, Max Verstappen and Bernie were subjected to the sort of abuse we have grown used to.

"I think he is just having a bit of a social media break, which I don't blame him for," explained Lewis' brother, Nicholas on Twitch, responding to fans wondering why the world champion hasn't been seen on social media since Abu Dhabi.

"Social media can be a very toxic place," he added, in a classic example of understatement. "But he's cool though. He's fine."

The fact that throughout the holidays F1 is still being discussed in the global media is exactly what Liberty Media wants, as does said media and the various F1 broadcasters.

The anxiety over Lewis' plans, and the reaction to them, in turn increases his value both to the sport and his employers.

To walk away from the sport, whatever one might think of the events in Abu Dhabi, would make Lewis look churlish, while some would eventually claim that he walked away because last year's fight took too much out of him and he couldn't face another.

There are all number of scenarios, and all play into the hands of Liberty Media and the likes of Netflix as the drama continues.

Fact is, Lewis is not one to walk away from a fight, and while the events of Yas Marina will have frustrated and angered him, they will not have broken him.

He is a fighter, and even if he feels that an eighth title is out of reach, he will not give up on the bid to attain it.

If you want drama, might we suggest the fantastic final series of Gomorrah, for as far as Lewis and his future in F1 are concerned we're all being played.

No doubt he does eye a future in fashion, or music, or acting or activism, but that can wait, for in the meantime there remains that little matter of payback for Abu Dhabi.