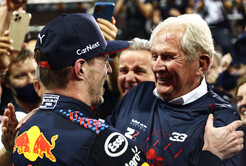 Red Bull's Helmut Marko has paid tribute to Mercedes for its "grand gesture" in not appealing the Abu Dhabi stewards decision.

The German team's announcement on Thursday morning, hours before the prize-giving gala, cleared the way for Red Bull and Max Verstappen to celebrate their Drivers' Championship victory without the threat of the appeal hanging over their heads.

"I can only say that this was a grand gesture by Mercedes," Marko tells Gazzetta dello Sport. "Hamilton has definitely been unlucky, but so were we at Silverstone, in Budapest and in Baku," he adds. "This is how races can go, but I understand the disappointment."

The Austrian also weighed into the ongoing row over race director, Michael Masi hoping that under its new president, Mohammed Ben Sulayem, the FIA will do more to assist him.

"The new FIA president will have to come up with a new system that will help Masi, because he can't do it alone," says Marko.

"At the moment there is too much pressure on his shoulders. I think, for example, that team managers and team bosses should no longer be able to speak to Masi through a direct line during a race.

"In addition, the rules need to be simplified. Too many decisions have been made that have displeased either us or Mercedes. There needs to be more uniformity in the judgements."