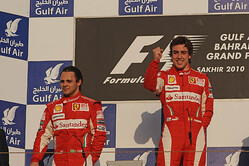 Ferrari has announced that Spanish banking giant, Santander, is returning as a 'premium partner', reviving a collaboration that it previously enjoyed with the Maranello outfit from 2010 to 2017.

The bank's logos first adorned the Scuderia's cars in 2010 when Fernando Alonso joined from Renault.

The new partnership, which covers multiple years, will see the bank's logo back on the cars, caps and race suits of Charles Leclerc and Carlos Sainz, and will also be present in the Ferrari Driver Academy activities.

Indeed, Banco Santander will also feature in Ferrari Competizioni GT, with its logo on the official cars participating in the FIA World Endurance Championship and on the upcoming Le Mans Hypercar.

In 2020, Santander was the world's leading bank in renewable energy finance and through its investment bank, Santander CIB, it has dedicated teams that specialise in advising companies in transitioning to a zero emissions economy. The bank will therefore support Ferrari on its own path to being carbon neutral by 2030.

"It's an honour to team up again with a global financial institution like Santander, which is committed to responsible banking and has shown leadership in renewable energy finance and ESG advisory services all around the world," said Ferrari chairman, John Elkann. "We look forward partnering with them to deliver our key objective of becoming carbon neutral by 2030. We believe Formula One with its innovations and technological developments will benefit our industry and ultimately society as a whole."

"We are very excited to work with Ferrari again, and support them in the green transition," added Ana Botín, Executive Chairman, Banco Santander. "Santander is fully committed to tackling climate change, and as Europe's leading provider of auto finance, we are determined to help the auto industry as it goes green. Our new partnership with Ferrari will accelerate our common progress."

The announcement comes at a time it is understood Ferrari is to drop Mission Winnow from its team name and branding.