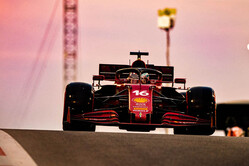 Carlos Sainz and Charles Leclerc were fifth and seventh fastest respectively for Scuderia Ferrari Mission Winnow in the final qualifying session of the season. Behind the two title contenders, it was all very close, as has been the case so often this year. In fact, the time sheet shows that six drivers qualified within less than three tenths of each other. Heading this fight for the second row was Norris, but Carlos came very close, just 61 thousandths behind the Englishman, while Charles was looking good until the final few corners.

The key to qualifying was management of the Soft compound tyre, especially for the final run in Q3. Charles pushed very hard in the first two sectors and then found he didn't have enough grip from the rears, thus losing a few tenths, which spoilt his chances of finishing higher up the order. Carlos had a more balanced approach over the whole lap and found himself very close to third place, which both Ferrari men were capable of taking today.

It is very difficult to predict the outcome of tomorrow's race, given that even over the long runs yesterday, the pecking order between the teams, apart from those vying for the title, was very close. The goal is to finish third in the Constructors' championship. Six points will guarantee this, no matter how many points McLaren scores, while Charles will aim to maintain his current place in the Drivers' standings, with Carlos hoping to move up the classification. The main aim for everyone in the team is to finish this long and demanding season in the best way possible to consolidate the progress it has made.

Carlos Sainz: I am pretty satisfied with my performance today, after yesterday was one of the most difficult Fridays in a long time and we've managed to recover well. We worked hard to put together a competitive car so my thanks to the entire team. This session confirms I've made solid progress in qualifying since the beginning of the year, so that's another positive from today.

Sector three was key: not pushing the tyres too much in the first two sectors and going for it at the end translated into a good lap. Looking at the timesheet, it could have been even better since Lando is only a few hundredths of a second ahead of me. Tomorrow in the race it's not going to be easy to pass but we will try our best to give him a good fight and gain some positions. I want to end my first season with Scuderia Ferrari on a high. Let's go racing!

Charles Leclerc: We had the potential to do better today. My first and second sectors were coming together very well, but I probably pushed a bit too much so that I had no grip left by the time I arrived at the last sector. It's a shame, but that's life.

It's going to be tough for us to fight back tomorrow, but we will do our best. We are strong in terms of our race pace, so hopefully we can put it all together one last time this season.

Laurent Mekies, Racing Director: A solid qualifying session, especially in terms of our performance level. Right from the start of the season, we have seen that it's very close behind the two teams at the front and it takes very little to find oneself ahead or behind a group that can be made up of between ten to 12 cars. Carlos and Charles gave it their best shot and were in the hunt for a place on the second row right to the end and their grid positions are a good starting point for tomorrow's race.

After races on two completely new tracks, we are at a circuit that has been significantly modified, making it much more flowing and I think the team has once again shown this weekend that it is capable of adapting quickly to anything new. Today, we went against the tide in our approach to qualifying, which will help us exploit our potential.

Tomorrow, we will try and convert that into a good result, in order to achieve the goals we are still pursuing. We want to have a good race to end the season, to put a smile on the face of our drivers, and all of us who work hard every day, both at the track and back in Maranello and all the people from all over the world who follow Scuderia Ferrari with so much passion and enthusiasm.