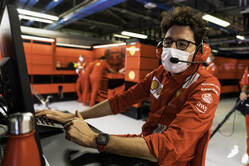 Mattia, first up, new track layout here at Yas Marina. What are the drivers saying about the changes?
Mattia Binotto: Honestly, not much because I had no opportunity to have a chat with them after the first session. Obviously, they drove it at the simulator, they practice it at the simulator, try to learn the new layout. I think they appreciate the changes in the last sector. I think they believe that can bring some more overtaking opportunities. Certainly, the new layout will be more demanding for tyres: high energy because high-speed corners but obviously now they are just discussing in the post-debriefing FP1 sessions. I think, as expected, it would be quite different to the past. I think the changes are somehow quite radical and, you have seen as well the lap-time has reduced quite a lot compared to the past, so quite curious to see the rest of the weekend. But for the comments from the drivers, I have not the right answer, right now.

Now Mattia, last race of the season, so it's a good opportunity to look back on the 2021 season. Let's start by talking about the drivers. They've finished one behind the other in the last four races and they're separated by just 8.5 points in the drivers' standings. Is that exactly what you wanted from them?
MB: I think that's a great result, showing that both drivers are contributing to the Constructors' Championship. It was important for us by employing Carlos to have a good racer, consistent, bringing points to the Championship, and this is what he did from his very first year and season with Ferrari. So, if I look at the ways he has been integrated, the way he has delivered all though the season, that has been great. And having two drivers so close, finally, pushing them, I think is a good benchmark. You can see that one is a good example and mentor for the other and they are pushing themselves. Even at the last race, they have two overtaking opportunities, swapping the positions but it's great to see and something that is encouraging for the future. I like to see those two guys fighting together and being so close.

How impressed have you been with Carlos' integration into Ferrari?
MB: Certainly, we are very keen on that. I think it has been obtained as well through quite a big effort through the winter time with engineers, was often in Maranello, sit down, go through the car, through the procedures, so it has been a lot of work back at Maranello and on the simulator, trying to prepare the season. I think we've seen the result of such an effort. We had a session of driving in Fiorano with an old car, just before the first testing, so everything was put in place, try to help Carlos for his integration. Certainly, he has been very good on his side as well. He has been doing good because he is a good learner. He is studying, he's trying to learn, trying to understand and I think he has been consistent in his integration and development in terms of performance through the season as well.

What about the car now? How pleased are you with the progress that you've made with it during the course of the season?
MB: You know last year has been a very difficult season, 2020, finishing sixth in the Championship. That was the worst in the last 40 years. In terms of performance, it was very poor, both on the straight lines and in the corners. I think that was the baseline for the 2021 because somehow most of the car was frozen, only two tokens or two changes possible. Aerodynamically, we could have developed it but with some limitations, so I think the baseline was difficult and so see that we are finishing third, again I think it's encouraging. It's showing that the team has been capable of addressing some weaknesses, the team has been good in understanding the weaknesses and developing the car furthermore. I think we have not developed much the car, we have just introduced an evolution of the power unit at some stage. That was it. To see that we have achieved a third place - and know that the competitors are strong around us - it's showing that the team has done good progress and progress has been done in all the areas. I mentioned before the straight line and the corners but that's the result of the aero, the chassis, the power unit - but as well I think in terms of race engineering, strategy, pit-stops, everything has come together with some improvements now. Third place is not what we are looking for as Ferrari. Our DNA, Ferrari DNA is to complete for the first place - but knowing what was 2020 I think it has again been quite encouraging to see the progress.

As you say, it's more-than likely you're going to finish third in the Championship. Have you always had the third-fastest car?
MB: I don't think in each track we have been the third fastest car. In the midfield, the level of competitiveness was very close and sometimes we're slightly ahead or slightly behind - but I think we have been quite consistent through the season, scoring points with the two drivers in a consistent way. I think that was important because, by simply scoring points at each single race we have been capable of increasing our understanding in the Championship. I think it's a great overall effort and result of the team.

Final one from me. Can we look elsewhere quickly? Kimi Räikkönen is retiring after this race, he's Ferrari's most recent World Champion. How do you reflect on his time at the team?
MB: As you said, he's the last World Champion with Ferrari. It's a long time I've known Kimi, I think it's more than 14 years. He has always been a fantastic driver, very fast. I think he's still fast today. But I think he's a great man as well. He's one of the few in the paddock I believe is a friend because he's a man that you can always trust. He's very respectful, he's certainly not speaking a lot but in his way of behaving I think he's really a great man and obviously the entire paddock will miss him in the future. I think like that: not only because he's a good driver but because he's a fantastic man.

Yamamoto-san, coming to you now. To start with, how would you sum-up Honda's time in Formula 1 since 2015?
Masashi Yamamoto (via translator): Starting from McLaren days, we have learnt a lot from them but we think we had a mutual respect too much. That's why we had maybe a shortness, a little bit, of communication and then it was a shame that the project didn't go well. And with Toro Rosso / AlphaTauri, we had the restart with them, and we have learnt a lot further with them again. And then we prepared many things for further development of the power unit. And with Red Bull Racing, of course as you can see, we are now fighting for the Championship. Having data from four cars enabled us to develop a lot. It's obviously a top team and it's great that we are now fighting for a championship with them.

Whatever happens this weekend, you've had a hugely successful 2021. Has the Honda board re-discussed its decision to leave Formula 1. Was there any talk about staying longer?
MY: Leaving F1 was a very big decision for Honda, and it was for the carbon-neutral and also for the customers all over the world. Although we're having good results this year, we never had a discussion to stay here.

Looking forwards, how much help with Honda give to Red Bull Powertrains from next year?
MY: It will be totally controlled by Red Bull but in accordance with Red Bull's request and also to support as much as possible the F1 activity for AlphaTauri and Red Bull, Honda will make our best.

And on a personal level, Yamamoto-san, will you stay involved next year, helping Red Bull Powertrains?
MY: I have no idea at the moment, our focus is just for this weekend, to win the Championship. After that, going back to Japan and reporting everything to headquarters and thinking about the future.

(Luke Smith - Autosport) Mattia, politically Formula 1 was quite turbulent last year. There was quite a lot going on. This season it does seem to have been a bit quieter for all teams bar Mercedes and Red Bull. I just wanted to know, for you, for Ferrari, how have you found the political battles in F1 this year and would you agree it's been a more serene year for F1 on that side of things?
MB: The battle is very intense, and very nice I have to say, and even watching from outside it's something incredible, coming to the last race, equal points, just waiting for the final rush. I think it's something incredible, that's for the fans, for the entertainment. Obviously it's a shame, or a pity for us not being there. We would like much to be there and fighting as well - but it's a great championship. F1, generally speaking, is giving a great show. It's giving a great show as a sport, it's been the case in this season but it's always improving. I think in terms of show, broadcasting, communications, the sport itself, a lot is done and everybody simply can only enjoy it.

(Dieter Rencken - Racing Lines) Mattia, we've reached the end of the first season under Stefano Domenicali, your former colleague at Ferrari who is now CEO of Formula 1. Could you just give us a summary of how you believe he has done? What he has introduced, what he has brought to bear on Formula 1 in this position please?
MB: Certainly, as for Stefano, he has been a former colleague. He has been as well my boss, not only a colleague. He is as well a very good friend. I think I can only answer by saying that he's doing very well. I think that as well Liberty Media is doing very well, since Liberty media has started the job they have improved a lot the show and the way that we are really presenting the show to the fans, not only in terms of broadcasting but social media and all of that. Certainly we have stepped-up the level of communication and the way we are engaging with the fans. I think that Stefano simply after a year is doing very well. It's not easy for him after Chase to keep the level because Chase has done a fantastic job but I know Stefano and I'm pretty sure even in the future he will continue doing very, very well.