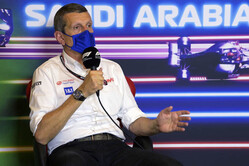 To you both: what are your drivers, what are the engineers, what's the team saying about the new track here in Jeddah?
Otmar Szafnauer: Well, I usually start with the same answer that this press conference takes place at the same time we have our debrief so it's hard for me to give you an answer on what the drivers have said but during the session, they were pleased with the grip level, a bit higher than we anticipated going into the session. Looked like the track was really good fun to drive but for us, anyway, there is some work to be done in between the two sessions to optimise the balance of the car and get the downforce levels right.

Guenther Steiner: Very similar to Otmar. I just listened to one driver and then I had to rush away but as Otmar, said the drivers were positively surprised about the grip level which came along after a few runs and enjoyed the track, it must be fun to drive, you know, once you get used to it then our guys, the engineers going over the data now and seeing where we can make some improvements as well.

Now Guenther, it's a new, very high-speed track with very little run-off. What advice have you given your drivers coming into the weekend?
GS: I don't need to give them advice any more. They got it once and they know now what to expect. They know that the worst thing they can do is losing track time so obviously they were both - I wouldn't say cautious - but at least they took it carefully, a little bit, to make sure they got around it and I think everybody did a little bit like this because there is not, as you say... once you go off, you hit something, there's nowhere to go so that means session over and they also have to think about the future. We're coming back here in March next year and the more we learn this year, the better we will be next year, so I think that they take that to heart and I actually didn't need to tell them anything about that.

Now it's been nice for Nikita to get a clean start to the weekend. That wasn't the case in Qatar, obviously, given his limited number of laps there, were you impressed by how he handled the weekend in Doha?
GS: Yeah, absolutely. He drove, I think, 15 laps before going into the race. It's always... also the confidence level must be low of anybody doing that so he handled it well and he stayed calm about it and made the best out of it, what was there.

And what happened to the chassis?
GS: It's in repair now. It's just... on the bottom, it's pretty badly damaged. I've seldom seen a chassis damaged like this, going over kerbs. It happened and it's now back in Europe to be put together again.

And Guenther, can we look at the season as a whole now? Given that you haven't developed your car, how tough has it been to keep the team motivated in 2021?
GS: I wouldn't say... It isn't easy but the further we get on in the season, the better it gets because we can see light at the end of the tunnel, hopefully. At least we know we get a new car, we are in the development game as well next year so I think in the mid-season, just before the summer break it was the toughest period, I would say, for everybody because the results weren't good, but after that we had a few little highs, they are very small highs but like last weekend or two weekends ago in Doha, Mick, in the race, stayed close to our competitors in front of us. We were as close as we ever were which is pretty good because we know we haven't done any development and other people have, so some things we are doing right. Hopefully, the car next year is what we expect it to be and we will have fun again.

As you say, you haven't developed the car but has the team progressed in other ways during this season?
GS: Yeah, because we kept it always like we would fight for points. There was never a giving up situation, that we didn't try hard. You saw last weekend, when they had to change... take the engine out of Nikita's car and we got it back in very quickly and everybody worked just as hard as we would if we were fighting for points so that, I think, prepares us for next year and we will be, at least on that side, in a good position.

And Guenther, Robert Shwartzman is going to be testing your car after Abu Dhabi. What do you expect from him, and can we expect closer ties between the team and him going forward?
GS: At the moment it's a test because it's a young driver test. We always discussed that young drivers haven't got the opportunity to test so with Ferrari, we just used... we call it the old car, it's still the current car for him and just give him a chance. There is no really big expectation. I think my expectation is that he does a day of running, that we don't have any mechanical issues, that he doesn't go off or anything and... I think this guy should enjoy it when they go out for the first time in an F1 car on an F1 race track.

Otmar, you guys have enjoyed a good run of late. Sebastian scored in three of the last four races. Lance, sixth last time out. Have you made a set-up breakthrough or has it been more circuit-specific?
OS: Well, I think if we put a weekend together and have a bit of luck and we can do well with the car that we have, a bit of it is circuit-specific. It was the first time we were in Qatar, we had both of them in the points and unfortunately Seb was pushed wide in turn one; I think we could have done a little bit better and Lance drove a fantastic race to sixth. It bodes well for the end of the season. I think, looking forward, we'd like to get both of them in the points here as well as in Abu Dhabi and finish on a strong note going into next year. That's always useful to finish quite strongly and then have a good, successful winter.

As you say, Lance drove a fantastic race last time out but prior to that he'd had a bit of a tricky run. Was it important for him to get that result before the end of the year?
OS: Yeah, it's always good to have a strong run and re-confirm that the skills and abilities are there. He is highly skilled and it was great to see him have a good run in Qatar and it was at a track that he'd never been to before and he didn't put a foot wrong. Had the Ferraris behind him for quite some time at the end and he did a great job to keep them there.

Now Otmar, this is the last time we're going to see you in this forum this year. So just, looking back at 2021 as a whole, how do you sum it up for Aston Martin?
OS: Well, it was a bit disappointing to start the season less competitive than we'd hoped, due to the late and unilateral aerodynamic changes that were made and thereafter we did the best we could to pull ourselves out of that hole but like everybody else in the midfield, we had to stop developing this year's car due to the fact that the 2022 regulations are completely different. And once we stopped, all we could do is get the most out of the package that we had and that's exactly what we're going to do in the last few races.

Did you get the most out of the package, on balance, this year?
OS: On balance, I think so, yes. We do a lot of work before we get to a Grand Prix in the simulator. The drivers drive it quite a bit, more than once and I think we hit the ground running well, but there are circumstances that are completely out of our control like I said. In the last race, Seb having to go off track to avoid being hit and some accidents and things where we didn't optimise, but like I said, those things are out of our control.

(Julien Billiotte - AutoHebdo) Otmar, what's the latest regarding your personal future? Will you still be with Aston Martin next year or could we see you somewhere else on the grid?
OS: Well, like, you know... I've answered that before, all that stuff is rumour and conjecture and like I said, I've got a contract here at Aston Martin.

(Jon Noble - motorsport.com) Guenther, Dmitry Mazepin has proposed a staff bonus scheme to help encourage personnel to stay with the team next year. What do you think of this idea and is it something you would accept?
GS: I would say... We don't have people running away. We have about 60 people who are with us from the beginning. At the end of the season, sometimes, every year, a few people leave because they want to move on in their careers, they want to move on from going to all the races, so it's not something unexpected. On the offer from Dmitry, we are looking into it, how we can make it work with the budget cap, legally and all that stuff and then we see when we get back to him.

(Dieter Rencken - Racing Lines) Otmar, where do you stand on the Dan Fallowes situation at the moment? I'm sort of hearing that he won't be able to join you until the end of 2023 or thereabouts. Have you thought about going legal about it?
OS: Well, that's a process we're going through now, Dieter, and I have now definitive date to give you, unfortunately.