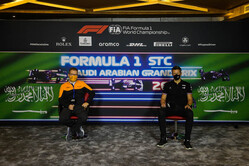 Welcome to you both, question to you both: what are your drivers saying about this Jeddah Corniche Circuit? Marcin?
Marcin Budkowski: Just walked out of the debrief to come here, so I only heard snippets of information but yeah, Fernando said it was a pretty demanding circuit, which we kind of knew after having prepared for this race and walked it last night. But yeah, lots of blind corners, high-speed between walls, so lots of very high attention all the time to make sure we don't make a mistake because I think a mistake is going to be paid very severely. If you crash, you could damage the car badly or even hurt yourself. So, yeah, we haven't seen any of this, this morning, which is good - but yeah, certainly a very demanding circuit and one that's going to produce a good show, I think.

And from a car set-up point of view, whereabouts are you? Can you compare it to another track?
MB: We've had information on the track layout, we didn't really have information on whether it was bumpy or in terms of what the grip would be so we've got to run through all of this information, based on what we have learned this morning. So far, so good. I think it's roughly what we expected. The grip isn't bad, actually. There was a bit of concern when these new circuits come up and they're not used in anger by either F1 cars or other cars, that sometimes the oil comes up and it makes it very, very slippery as we've seen in Portugal and Istanbul last year. That doesn't seem to be the case. At least our car has a lot of grip, don't know about Andreas's but ours seems to work quite well.

Thank Marcin, Andreas?
Andreas Seidl: Yeah, pretty much the same on our side. I think the drivers were looking forward to the track after what they have seen back home in the simulator and also after the track walk here. Have to say well done to the team back home for preparing the drivers, the team in the simulator and the simulations for this track here. We were straight away in decent shape I would say, from the first run onwards, which is always good. But in the end, still early days. On paper I think it is a track that should suit our car with running a bit less downforce, compared to previous races - but we have to see now, I guess, how the track evolution is as well. But looking forward to the rest of this weekend here on a very exciting track. And a very special track as well.

Andreas, staying with you, can we throw it back to the last few races. It was a tough triple-header for McLaren. How do you explain what happened in those races? Where did the performance go?
AS: Well, first of all, I think it had nothing to do with performance. Whenever we had our incidents, I think we were ahead of at least one car of the Ferraris, for example. We lost more than 30 points with first lap incidents, or with a tyre puncture last time with Lando. In addition to that on the team side there were things we could have done better. That's how it goes sometimes. It's part of our learning process as well, as a team. It's important that we learn from that and improve again. It's simply important now to focus on these last two races and make sure we get back to scoring the points that are on the table for our car and for the team with Daniel and Lando.

Several people have asked me to ask about Daniel in Qatar. Can you just elaborate on what his issues were in that race?
AS: Yeah, on Daniel's side, unfortunately we had an issue with having the need to save a lot of fuel in the first half of the race which pretty much compromised his race totally, so he had no chance to get back into the points, despite a strong start. In the end we had a combination of two issues: I think the fuel consumption was higher than we anticipated - which I think was common for a lot of cars, listening to the radio conversations throughout the grid, and then in addition we had a technical issue on the car which gave a too-high fuel consumption reading. And until we understood the issue, we had to save an enormous amount of fuel, which took away any decent performance.

Is that the first time you'd had a problem like that?
AS: Yeah, it's something we experienced for the first time - but we have understood the problem, together with our colleagues from Mercedes and I'm sure it won't happen again.

OK, and the Constructors' Championship Andreas. You're 39.5 points behind Ferrari. What's your take on the battle now?
AS: Ah, well, obviously seeing this gap now after our bad run in the triple-header, we need to be realistic. At the same time, we are competitors, we will give it our all, as long as it's theoretically possible. But yeah, obviously we have a high chance of finishing P4. Which, again, from my point of view would be a great result for us. We shouldn't forget which teams are in front of us. It is not a surprise that a team like Ferrari after their exceptional bad year they had last year, is coming back strong. We shouldn't forget that we are beating, with a good gap, teams like Alpine - full works team - and other teams as well, so the most important thing is again we made a big step forward in terms of the performance, in terms of how we work together as a team. We could score our first victory in quite some time, first pole position, so I'm very happy seeing this development as a team, and that's positive and that's key, obviously, on our journey to get back to the front in Formula 1 more often during race weekends - but at the same time we need to be realistic. That takes time. I would say we are still a young team, after the reset we have done two years ago. We have now, let's say, a stable organisation in place, and now we simply need time to learn together, grow together, and make the next steps.

As you say, Andreas, you made a big step forward this year. How surprised were you by the leap that Ferrai made in the middle of the year?
AS: Not surprised because, I think if you look at the performance ranking, didn't change very much really compared to the first races of the year. If you look at the qualifying results in Bahrain, Imola or Portimão, we pretty much saw the same as we have seen in the other tracks now at the end of the season in high downforce configuration. I think we simply, let's say, maximised our points a lot in the first half of the season where Ferrari, from time to time, struggled on the operational side, and we maximised our points especially on the tracks that were suiting our car with a low downforce configuration - but at the same time we lost now a lot of points as described before. In the end, overall, I think P4 - again we still try to fight for this P3 - but if we finish in P4, I think it's in the end a fair reflection in terms of where we are as a team at the moment, which is a good place to be in, and we simply need to keep working on our journey, on our plan that we have in place, getting infrastructure in place, yeah, keep working together as a team now, with this new organisation, and then I'm confident we can make the next steps in the next years.

Andreas, this is the last time we'll see you in this forum this season, so when you look back at 2021 as a whole, what is your message to the boys and girls in Woking.
AS: First of all, a big thank you, to every single member of the team again for the great commitment and the hard work everyone has put in during difficult times again. Big thank you also to our colleagues from Mercedes. It was very important to get the Mercedes power unit into our car for this year before we have this big change for next year with completely new technical regulations and gained this experience this year and, yeah, I think everyone can be very proud of what we have achieved this year, this big step forward we made again. And we simply need to keep working hard as one team towards this objective, to make the next steps in the next years and again, I'm very confident we can make these steps. We have everything in place once our infrastructure is finished as well in the next one to two years, to challenge the teams in front of us again.

Marcin, coming back to you. Let's throw it back to Qatar, a tremendous race for the team there. How satisfying was it to pull such a large gap on AlphaTauri in just one race?
MB: I think the first satisfaction for the team, to be honest, was to see Fernando on the podium. It was our second visit to the podium this year. It was Fernando's first for quite a few years and well deserved. I think everybody would agree it was long overdue for Fernando, and at a few races this year he deserved a podium and didn't get it through various circumstances. And yeah, we were extremely happy at the bottom of the podium to cheer for him and then you do the math after that. Obviously, that third place, together with Esteban's fifth, was a great points tally for us. Made even sweeter by the fact that AlphaTauri didn't score any - so it's a 25-nil in one race, that's a pretty good result for the Championship, and certainly that makes us a bit more relaxed and comfortable here - but I think relaxed is the wrong word because, there's two races to go and who knows? Especially on a circuit like here, the AlphaTauri could do the same to us and maybe we'll be back to where we were two races ago. Yeah, slightly more comfortable going into the next two races but there's still some points to score to make sure we finish fifth.