"Unbelievable, seven years, but finally we got it!" 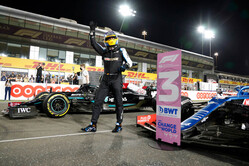 Returning to F1 this season after walking away at the end of 2018, many felt that while Fernando Alonso was worth more than two titles the sport had moved on while he was away.

Out-scoring his younger teammate 11-9 in qualifying the 40-year-old has also had the edge on race day, and despite Esteban Ocon's win in Hungary has 77 points to the youngster's 60.

Qatar marked the Spaniard's return to the podium for the first time since 2014 (Hungary), as he became the third driver over 40 in 35 years to make it to the podium.

"Unbelievable," declared the Spaniard at race end. "Seven years, but finally we got it.

"We were close a couple of races," he added, "but not enough. Sochi was the last possibility.

"I think we executed a good race, a one-stop strategy, the car was great all weekend and in qualifying the pace obviously helped to start at the front.

"Also, with the penalties... we overtook Gasly in Turn 2, that also helped our race, to have a little bit cleaner air.

"Obviously a long wait," he grinned. "Your career sometimes goes up and down. I had wonderful moments two, three years ago winning Le Mans, winning the world championship in Endurance... but obviously coming back now in preparation for 2022, and the new rules and have this podium now, at the end of the year, it feels really nice, and I think we are more ready than what we were ten months ago.

"Probably as a weekend in general, this one was the best," he added, "as Friday, Saturday, Sunday was very consistent. Sochi was quite well executed as well, only the rain at the end stopped us from the podium there.

"The last part of this 2021 is another level compared to the first part. I'm happy with this year of comeback and this preparation into next year is definitely another level now."