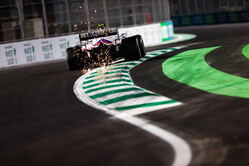 Round 21 of the 2021 FIA Formula 1 World Championship began with practice on Friday at the Jeddah Corniche Circuit as teams prepared for Sunday's inaugural Saudi Arabian Grand Prix.

Friday's action consisted of two 60-minute sessions - FP1 and FP2 - around the 6.175-kilometer (3.836-mile), 27-turn circuit - the longest street circuit in Formula 1 and second-longest track on the schedule after Belgium's Circuit de Spa-Francorchamps.

Mazepin and Schumacher ran their exploratory installation laps on differing compounds - Mazepin starting the weekend on Pirelli P Zero White hard tires and Schumacher on the Yellow medium rubber. While the search for grip continued throughout the session, with just two support series running earlier in the morning on the maiden tarmac, a switch to Red softs followed for the Haas duo. Schumacher duly banked his best time of 1:31.525 for P18 while Nikita also set his fastest lap of 1:33.464 for P20. A brief high-fuel stint concluded each driver's FP1 session.

FP2 ran under the lights in the evening - as will Sunday's 50-lap race - but conditions remained warm with air temperature a balmy 29 degrees Celsius (84.2 degrees Fahrenheit). Schumacher finished the session in P18 having commenced his run-plan with a 5-lap stint on the hard tires. The German ran softs for his qualifying simulation - setting his quick lap of 1:30.652. Mazepin finished in P20 with a best outing of 1:31.629 - set on softs, the Russian starting his workload with a 5-lap tour sampling the medium compound. Both drivers wrapped the session with high-fuel runs - the session ultimately ending early due to a red flag stop caused by Scuderia Ferrari's Charles Leclerc -the Monegasque driver thankfully walking away unscathed from his crash at Turn 22.

Nikita Mazepin: "It's a very different track to what we've experienced this year - and not only this year for me - but in my career. It's a track that requires a lot of confidence and knowledge of where it's going because a lot of the corners look the same. I was fortunate to be able to do laps this week in comparison to the week before last and I enjoyed it - I think there's still a lot of pace to be found out there."

Mick Schumacher: "It's very quick and quite intense. I think we got to learn the track and understand it and now I'm looking forward to tomorrow. We were as close to the Williams as it looks but we know they'll be able to turn up their engines more for qualifying so we'll just have to wait and see - hopefully we'll have a better car around the corners and catch-up a bit. Track conditions are improving a lot as it was very dirty to begin with, so I expect there to be a lot of track evolution in general."

Guenther Steiner: "First off, it's always exciting to see a new track come to life - the Jeddah Corniche Circuit is no different, it looked good under the lights tonight. To finally get out there today and to get 87 laps in between the two sessions with our rookies is a positive. Track time is obviously at a premium, as is grip on such a new surface, but I think we used the day wisely to prepare ourselves for tomorrow's qualifying session. There's no doubt a lot of key learnings Mick and Nikita will take from today's running, and together with the engineers we'll see what we can do to further improve. A solid first day in Saudi Arabia."