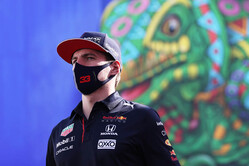 As Lewis Hamilton appears to patronise his title rival, Max Verstappen refuses to rise to the bait.

Not for the first time, seven-time world champion Lewis Hamilton appeared to take a swipe at his rival when, speaking at the official press conference, the Mercedes driver suggested that Max Verstappen's championship ambitions could be compromised by his lack of experience at battling for honours in the highest echelons of the sport.

"I have been here a long time," said the Briton, "and I know Max has not won a championship in a long, long, long time. So I know what it's like going for your first championship, particularly in this sport, I know the pressures that come with that, and so it's nothing less than I expected from him.

"Plus he's still a youngster," he continued, "and he's going to be growing a huge amount over the next decade, which I think everyone will be excited to see."

"I like what I'm doing, you know?" laughed Verstappen, when told of Hamilton's comment. "So that takes the pressure off.

"It's not the first time I've been in a championship fight," he continued, "yes it's the first time in F1, but not in my life, so that doesn't really change because you need to win. And that's what I've been doing in the past as well so I need to strive to do the same here.

Asked, as was Hamilton, about Toto Wolff's claim that the title could be decided by another clash, Verstappen replied: "I don't really think about previous historic fights between two drivers, what they have done... that's the past.

"I just focus on what I have to do on track and that's to try and do the best I can, and that's how at the end of the day you're going to win the championship. You have to try and get the most available points out there and of course try to beat your rival."

In terms of the Autodromo being a Red Bull track, he said: "It's all about details. You can look good on paper, but you still have to nail your set-up and all the combinations around it.

"It might look good for us, but we have to again be on it From FP1 onwards and make sure we are in the right direction with the car."