"I gave it absolutely everything," says Hamilton 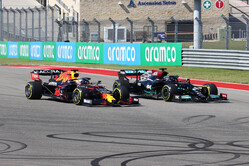 Despite his best efforts, Lewis Hamilton was unable to take full advantage of Max Verstappen's risky tyre gamble and consequently trails his rival by 12 points.

With Mercedes fortunes turning 180 degrees after Friday's opening session, Lewis Hamilton was forced to spend much of the rest of the weekend playing catch-up.

In qualifying he missed out on pole by just 0.209s, insisting that he had given everything, and while he took the same approach in the race it was not enough.

Taking the lead at the first corner, the Briton lost it when he was undercut by Verstappen at the first round of stops, the Dutchman having pitted three laps earlier.

However, when Red Bull once again went for the undercut on lap 29 it looked as though they'd made a mistake by stopping too early.

By the time Hamilton pitted 8 laps later Verstappen was already beginning to struggle, and, as predicted, the Briton was hard on his tail for the final few laps of the race.

But it was not to be.

"We gave it everything we had," he said, "they were just quicker than us this weekend, for whatever reason.

"I can't pinpoint it," he admitted. "It looked like they just had a better rear end, a little bit less sliding than we had."

Asked about the start, which saw him get the jump on his rival, who ran wide and almost lost position to Sergio Perez also, the Briton said: "Yes, a great start. The goal was to get in the lead...

"Finally got a good start," he continued, "I have not had as good a start in a long time, and I was really happy with it. It was just about staying clean and coming out ahead and holding onto it.

"It felt good at the time to get into the lead," he admitted. "I thought, 'this is step one', and as I said, they were just too quick.

"I don't know what we could have done differently," he sighed. "I'll have to sit down and talk with the team afterwards.

"I think the team did a great job today and it was the best we had. We go into at least the next two tracks, which are very strong circuits for Red Bull, so that's going to be tough, for sure."

Interestingly, when asked about Toto Wolff's claim that the German team had to compromise on pace due to the "massacreing" the car was suffering on the bumps," Hamilton said: "That's pretty strong use of words...

"There wasn't a big problem," he insisted. "Right, I think it was a bumpy circuit, first of all, but we ended up going back to where we started the weekend so there was no problem."