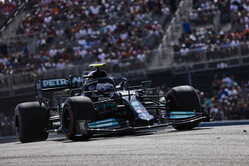 Toto Wolff has revealed that his team was forced to compromise performance in order for the W12 to handle COTA's notorious bumps.

Friday morning practice saw the Mercedes duo almost a second clear of their Red Bull rivals, suggesting a walkover for the German team this weekend.

However, Red Bull closed the gap in the afternoon and by next morning appeared to have the edge.

While Lewis Hamilton grabbed a place on the front row alongside his championship rival, having previously admitted that Mercedes had "lost ground", few understood how Red Bull had been able to turn the tables so convincingly.

Toto Wolff has now revealed that to prevent his cars being "massacred" on the notorious COTA bumps, changes were made which compromised performance.

"What we did is that the car was bottoming out quite heavy, and that breaks the car," said the Austrian. "So we took some mitigating steps to not break it, or massacre it that hard, in order to survive the race.

"Definitely a compromise for going faster on the track," he admitted, "but maybe a necessity to actually finish."

Despite the changes, Wolff admits the team remains perplexed as to how it lost performance from one day to the next.

"We have lost performance from Friday to qualifying, clearly, relative performance," he said. "We don't know yet where that is, and we haven't got the right explanations yet, but clearly, we haven't met our expectations."

Of course, this comes at a time the reliability of the power unit is in doubt, but nonetheless, Wolff remains hopeful.

"If you look at the pure performance picture, both Red Bulls look very strong, and probably on paper, they are the cars that are ahead," he admitted. "But we've seen many Sundays that took a very different direction because of the start scenario, or DNFs. And that's why anything goes.

"And even though I tend to always say, 'well the qualifying result is the result at the race', thank God it's not the case, and there is ground we can still conquer tomorrow, and hopefully get Valtteri back to sharp end of the grid."