Verstappen was doubtful of aggressive strategy 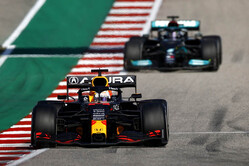 Austin race winner, Max Verstappen admits that he was highly doubtful that Red Bull's aggressive tyre strategy would pay off.

Twice over the course of the race, the Austrian team chose to undercut rival Lewis Hamilton, with Verstappen first pitting on lap 10 and again on lap 29, while Hamilton pitted on laps 13 and 37.

The first stop was particularly significant as Verstappen had lost the lead to his rival in the first corner, and undercutting the Mercedes allowed him to retake the lead when the world champion stopped.

However, stopping so early the second time left him vulnerable as when Hamilton eventually stopped he re-entered the fray with tyres that were 8 laps fresher.

This allowed the Briton to close on his prey, and, as predicted, was on the tail of the Red Bull for the final laps.

However, a combination of factors, including traffic, dirty air and skilful tyre management by the championship leader allowed Verstappen to come out on top.

"We lost out at the start, so we had to try and do something else," admitted the Dutchman. "The tyre wear is quite high around this track, so we did go aggressive.

"I was not sure it was going to work," he continued, "but, the last few laps were fun... a bit sideways through the high-speed corners, but super happy of course to hang on.

"It was exciting," he insisted, of the final laps which saw the gap between the two concertina but never by more than just over a second. "The whole race, the pressure was on, not knowing how quick Lewis was going to get you.

"We went very aggressive on the first stop after losing the lead in the start, then again in the middle stint Lewis was within that undercut range so we had to respond, go early again... and then the last stint was very long, in this heat especially.

"We managed to hang on at the end," he grinned, "just enough within the tyres to push.

"With two laps to go I had the Haas in front of me, going into the last sector he was in front, and especially with worn tyres it is not easy to follow.

"Of course luckily then he gave me that DRS, so whatever I lost I think it stabilized a bit because of that DRS."