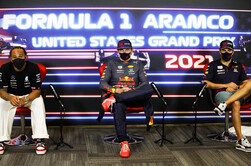 Q: Lewis, that was very tense for all of us watching. Red Bull jumped early, it looked like you guys had stayed strong and it looked like you had the right strategy but it didn't quite come off at the end.
Lewis Hamilton: Firstly, congratulations to Max, he did a great job today. It was such a tough race. I got a good start. I gave it absolutely everything but at the end of the day they just had the upper hand this weekend and we couldn't really have asked for more. But, a big, big thank you to my team for great pit stops, great hard work throughout the weekend. And what an amazing crowd. To perform in front of you guys is such an honour.

Q: It's a very special race here and I'm sure it's one where you wanted to come away with the victory. You got that bonus point for fastest lap but let us know how it feels to be in front of this crowd. It feels like we have broken into the US, which is pretty special.
LH: Yeah, it feels like this is our acceptance into the US. What a place to be, as I said. It is a real honour to be out here. I hope we get more races out here and I hope that the sport continues to grow because you can tell just how great the fans are out here, so I hope we get to come out here more.

Q: Checo, it looks like it was a little bit physical out there today?
Sergio Perez: Oh, I struggled massively, you know. Since lap one I ran out of water. I couldn't drink at all. I think by the middle of my second stint it was starting to get pretty difficult you know, losing strength. I think my toughest race ever, physically.

Q: Congratulations for bringing home that third place. Great points for you, great points for the team. I remember that this was your home race before we had the Mexican Grand Prix. These fans have been cheering your name, what have you go to say to them
SP: (In Spanish) Many thanks for so much support, honestly, I didn't give up just because of you! Many, many thanks.

Q: Congratulations Max, that was an aggressive strategy but you made it work.
Max Verstappen: Yeah, of course we lost out in the start, so we had to try to do something else but the tyre wear is quite high around this track so we did go aggressive and I was not sure it was going to work but the last few laps were fun. A bit sideways through the high-speed corners but super happy for us to hang on.

Q: You guys have maybe learned from the mistakes of the past. An amazing victory. Lewis was bearing down on you at the end. It's Red Bull's 200th podium today so a very special event and a very special event for you too. Have you got a message for the fans here. They've been amazing all weekend.
MV: They have been incredible. It's amazing first of all to be here but also to see so many of you around the track, so hopefully we can do this for many years to come.

Q: Max, what a brilliantly executed drive by you. Many congratulations. How do you rate this race? Is this one of your best?
MV: It was exciting. The whole race the pressure was on because not knowing how quick Lewis was going to get you. We went very aggressive on the first stop after losing the lead at the start. Then again during the middle stint Lewis was within that undercut range so we had to respond. We had to go early again. And the last stint was very long, in this heat especially. Yeah we managed to hang on at the end, with just enough in the tyres to push. With two laps I had the Haas in front of me and going into the last sector he was in front and especially with worn tyres it's not easy to follow. Of course luckily then he stayed in front so he gave me that DRS, so whatever I lost I think it stabilized because of that DRS. The last lap was all about trying to have a good first sector and beginning of the second sector but it wasn't easy because the tyres were really finished. But it's incredible to win here.

Q: Max, just tell us a little more about those last few laps. What was it like being hunted down?
MV: I mean, I think I've been in this position before where you are in the lead with the older tyres or the other way around where you are hunting. I just tried to do the best I could and tried to be consistent, trying to find the grip within the tyre, without damaging too much. It wasn't easy but I think at the end of the day that made it really exciting.

Q: It certainly did, and strategically, after you'd lost the lead at the start, was it all calm?
MV: yeah - I mean, what can you do? We tried to stay close and it seemed like on the Medium tyre we had really good pace because I could stay in the DRS. And then as soon as we went to the hard tyre it seemed like maybe that pace wasn't there as much, which was a bit surprising - but nevertheless we managed to hang on and of course that first stop was very early on - but luckily it worked out.

Q: And Max, five races to go, how much confidence does this win give you?
MV: This doesn't really change a lot because it's all about the details - I always say it - so a win doesn't give me more confidence or whatever. We are all confident within the team that we can do a really good job - but we need to nail the details and we have to start over again in Mexico, to try to get the best out of our whole package.

Q: Lewis, coming to you now, well done to you too. It was a fantastic battle between yourself and Max, right to the flag. What was it like inside the cockpit from your point of view?
LH: It was a fun race. We had a good start, he seemed to be quite close throughout on the Medium tyre and then obviously they stopped extremely early and then just tried to offset myself after that. I was hoping it would give us a chance of fighting late on but I think track position was key today.

Q: What about the pace of your car on the Medium tyre. Max was referencing it a moment ago, that he was able to stay with you. Do you feel that you were more competitive on the Hard?
LH: I think they were quicker all weekend, on all tyres today. Just in the heat, I think the real strength has shone through this weekend, a bit like it has in other places, like Bahrain, this year. So, yeah, did the best I could with what we had.

Q: Lewis, if we think back to first practice on Friday, both yourself and your team-mate Valtteri Bottas, very, very fast yet, as the weekend went on, the pace seemed to slip away. Do you understand where it went, relative to Red Bull?
LH: No, I think they just got quicker. I have no idea about it.

Q: Checo, well done, your fourth podium of the year. How good was it to be back up there on the podium for the second race in a row?
SP: It was nice. I think there are a lot of positives to take from the weekend. My race was, I think, firstly compromised by the tyres that I had and being on the scrubbed Medium, I think was quite a bit of a disadvantage considering how high the degradation was today. And then, I struggled massively, physically, from lap 20 onwards, so it wasn't an ideal race. But I think we managed to stay within the undercut region from the leaders and that really triggered the undercut, firstly with Max on Lewis. We tried to do the same with Lewis and he had no other option but to pit, so we avoid him doing his optimal race, so I think in that sense it worked well - but since lap 20 onwards, I was pretty much done.

Q: Checo, have you ever felt like this after a grand prix?
SP: No, it's the first time. And I hope the last one.

Q: Let's throw it forward two weeks, the Mexican Grand Prix next. What can you do there?
SP: Yeah, I think we have a good package. We will be strong over there. Typically, Red Bull has been extremely strong in Mexico, so yeah, I look forward to it massively and I really hope that we can keep going on the podium again.