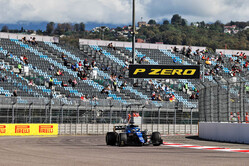 Alpine F1 Team finished with both cars inside the top eight at the Sochi Autodrom as preparations got underway for this weekend's Russian Grand Prix.

Esteban Ocon ended the day in fifth place with Fernando Alonso tucked neatly inside the top ten in eighth, after a dry and crisp day at the 5.848km Olympic Park venue in Sochi.

With the threat of rain looming large for tomorrow, both cars completed some decent mileage during the morning in a trouble-free session. Fernando ended the session in tenth and Esteban slotted into eleventh, with less than a tenth separating the two cars.

Free Practice 2 saw a mix of high and low fuel running for both cars, with Esteban and Fernando occupying the top three positions after some early runs using the Soft tyres.

On a brand-new set of Softs, Esteban improved his time with a 1min 34.402secs, which was good enough to place him fifth in the timings. Fernando also improved his time during the first sector, but a red flag for Antonio Giovinazzi's accident meant his effort was in the end futile, leaving him in eighth on a previous lap time of 1min 34.762secs. The Spanish driver recorded the fastest Sector 3 time of the day.

Both cars finished their day assessing some high fuel running on the Medium tyres ahead of tomorrow's qualifying for the Russian Grand Prix.

Esteban Ocon: "It's good to be back in Sochi as it's a track that I've always enjoyed racing at. It's high grip, especially in comparison to Monza last time out. We have the Softest tyres on the range here, so that gives us some things to try and understand. It's been a very busy day for us, busier than a usual Friday, with half an eye on the weather tomorrow and we aimed to be as productive as possible. Things could be interesting tomorrow, so optimising today was important. We completed quite a few runs - low fuel and high fuel - and we have a good idea on what we can do on car set-up. Let's see what the rest of the weekend brings but so far, I'm pleased with our progress."

Fernando Alonso: "It was a reasonable day for us today. We don't know how useful some of the data will be because of the potential rain forecasted for tomorrow, but the car seems to behave okay here. We set up a few different things in FP2 and we found a few benefits, so I am happy with that. We could have achieved a better lap time without the red flag for Antonio (Giovinazzi), but it's only Friday, so let's see what tomorrow brings."

Davide Brivio, Racing Director: "We had to try and do as much work as possible today knowing that tomorrow's weather looks very unsettled. We've had a positive day with our usual combination of long runs and short runs with different tyre compounds. We collected a lot of good information and had some decent lap times. At the moment it looks like the weather may be dry on Sunday so our relative pace looks positive for the race; let's see what tomorrow brings as it looks like we will have to deal with some very significant rain."