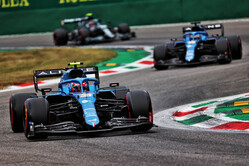 Alpine F1 Team will occupy the seventh row of the grid for tomorrow's second ever Sprint Qualifying at the Italian Grand Prix with Fernando Alonso thirteenth and Esteban Ocon fourteenth in Friday Qualifying at Monza.

It's the first time since the British Grand Prix in July that at least one Alpine has not progressed to the top 10 shootout in Qualifying.

Just 0.034secs separated Fernando and Esteban in Q2 with the team-mates' qualifying head to head battle now tied at seven apiece as both drivers look to maximise the performance of the A521.

After a smooth afternoon in FP1 in Monza, both drivers began the evening's qualifying on new Soft (C4) tyres. Esteban's first run was good enough for twelfth and Fernando ahead in eighth; both enduring scrappy laps with traffic. On their second runs on new Softs, both drivers found improvements and were through to Q2 with Esteban fourteenth and Fernando thirteenth.

In Q2, Esteban's opening effort was enough for eleventh with a 1min 21.167secs - 0.021secs to tenth place - with Fernando aborting his maiden lap after running wide at Turn 1. After an error free second run, Fernando's 1min 21.069secs put him thirteenth with Esteban's second effort an improvement by 0.064secs on his previous lap to slot in behind his team-mate. Tomorrow's second ever Formula 1 Sprint Qualifying begins at 16:30pm local time.

Esteban Ocon: "I'm a bit disappointed in our result in qualifying as I feel there was a little more left out there for us. It was very close out there again with our rivals and also close between Fernando and I - less than half a tenth - which does show we're pushing the car to the maximum. We've been on a good run of races reaching Q3, so it's disappointing for that to end. However, this weekend's format is different to usual and we have tomorrow's Sprint Qualifying and Sunday's race to make a comeback. We have positions to make up, but I'm aiming to be on the front foot tomorrow, make some overtakes and put ourselves in a better position for Sunday's race."

Fernando Alonso: "We didn't have many laps today with the shorter format, but we couldn't find the pace in the end. We got through to Q2 but then my first run in that session wasn't ideal as I locked up the front tyres going into turn one. This meant I only had one push lap. Q3 might have been possible today with a few tenths to gain. It's the Sprint tomorrow, though, so let's see what we can do then. It will be more difficult to overtake than it was at Silverstone, and the first few corners will be tight, but we have to remember the points are scored on Sunday."

Davide Brivio, Racing Director: "Today's result wasn't what we were targeting or expecting with Fernando thirteenth and Esteban fourteenth on the grid for tomorrow's Sprint Qualifying. As always, we always aim for better and Q3 is our target. On one side, we managed the session quite well and it was unfortunate that Fernando only had one run in Q2 after locking up at Turn 1 on his first push lap. Esteban was building nicely but just short of making the top ten. Overall, though, it wasn't enough today. Fortunately, we have an opportunity in Sprint Qualifying tomorrow to make up some positions and put ourselves in a more competitive place for Sunday's main race. We're looking forward to racing tomorrow and seeing what we can do."