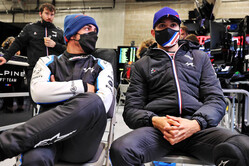 After yesterday's wet qualifying session, Esteban was due to start the race in eighth and Fernando in twelfth, but, both drivers inherited a position after Sergio Perez's crash on the lap to the grid.

With persistent rain falling in Spa, the first formation laps under the Safety Car began at 15:25 local time after an initial delay to proceedings. Conditions were deemed unsafe with the race red-flagged. With a break in the weather, the race restarted at 18:17, again under the Safety Car, before the second and final red flag brought the Grand Prix to a close with half points awarded as a result of three laps being completed.

Esteban Ocon: "Firstly, I feel sorry for all the fans out there at the track today. Thank you to them for their patience and their enthusiasm at waiting all afternoon to see some action. Unfortunately, it just wasn't possible today with the rain, and safety has to be the priority. The correct decision was made to stop the race, so credit to the FIA and Michael Masi for trying their best and making the right call in the end. The conditions were really tough out there, especially the lack of visibility. We pick up three points today, and now we look ahead to Zandvoort where hopefully the weather will be better."

Fernando Alonso: "It was the correct decision to stop the race given the conditions. But I think it's strange that points are scored for this weekend. It was only ever a red flag situation out on track and we only drove laps under the Safety Car, so it wasn't a race. Everyone involved tried their best, so it's nobody's fault, but it's a shame. Despite all of this the spectators were amazing all weekend and it was good to see them back no matter the weather."

Marcin Budkowski, Executive Director: "It was a shame we weren't able to race today, especially at such a great circuit. The FIA and Formula 1 tried everything to get the race underway, but the rain just wouldn't stop. Safety has to take precedent in these situations and our drivers confirmed over the radio during the laps under the Safety Car that it wasn't safe to race, especially because of the lack of visibility. The correct decision was made to abort the race. Credit to the fans who remained at the circuit in the grandstands all afternoon and thanks for their fantastic support all weekend. We move onto Zandvoort hungry to resume racing and we look forward to trying out an exciting new track."