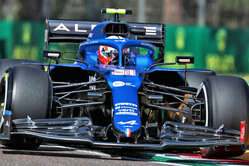 Alpine executive director, Marcin Budkowski reveals why drivers Esteban Ocon and Fernando Alonso are getting through so many exhaust systems this season.

Quietly, almost under the radar, a new component was added to the list of power unit elements that are strictly limited this season.

While we have got used to ICE (internal combustion engine), Turbocharger, MGU-K, MGU-H, Energy Store and Control Electronics, this year saw the addition of Engine Exhaust Systems.

While drivers are limited to three ICE, Turbochargers and MGU-Hs this year, they are only allowed two Control Electrics, Energy Store and MGU-Ks. As for the Engine Exhaust Systems, the limit is eight.

While the majority of the Mercedes-powered drivers are still on their second exhaust, all the Ferrari runners are on their fourth, however at Alpine Fernando Alonso is on his fifth and Esteban Ocon his sixth.

"We had an issue at the beginning of the year which meant that we limited the mileage of our exhausts to avoid failure during the race," explains the team's executive director, Marcin Budkowski. "So we have introduced a few exhausts at the beginning of the year to contain the risk. We believe we've solved this issue now with a spec of exhaust we introduced during the season.

"What we're doing now is really managing the pool," he continued. "We have a number of exhausts per car for the season, we just need to manage it.

"Effectively you manage them between practice sessions, qualifying and the race," he added, "by having a bit more resources in your pool you can use them in the most efficient way for the rest of the season.

"Touch wood, we don't expect to take penalties this season. But obviously, as we've used a few more than we would have liked to at the beginning of the season, then we are exposed."

With McLaren switching to Mercedes-power this season, Renault has no customer teams. As previously reported, Alpine is effectively using a 2019 unit ahead of the introduction of an all-new unit in 2022.

Asked how the current unit compares to its rivals, he said: "I'm not going to answer this one directly... we have a competitive analysis, and we have a fairly good idea of where we stack in terms of power, but also in terms of energy management, weight and packaging and things like this.

"But it's a 2019 engine we are using and as a result some of our competitors made gains that we haven't. So we're in a slightly non-ideal situation where we had to delay our new power unit, which has improvements to propulsive power and energy management, the kind of usual things that make quicker on a straight line has also a new architecture and changes that are designed to address some of our weaknesses compared to our competitors.

"But we didn't have the resources to relaunch the development programme on this year's engine and continue to work on the 2022 engines. So we've decided to put all our efforts on 2022.

"It's a strategic decision. I believe it's the right one but it's painful, because as a result this year we lost ground compared to our competitors."