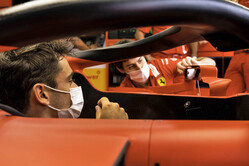 In a further blow, Ferrari has confirmed that Charles Leclerc's engine was irreparably damaged in the first corner incident on Sunday.

The Ferrari driver was the innocent victim of Lance Stroll at the opening corner, and having been pushed into Daniel Ricciardo, retired on the spot.

Ferrari has now confirmed that on top of the fact the Monegasque missed out on a decent points haul he will now face a grid penalty as his engine was damaged beyond repair.

"Examination of the number 16 SF21 carried out yesterday in Maranello, revealed that the engine was irreparably damaged and cannot be used again," said the Italian tem on Tuesday.

"This is a further blow for Scuderia Ferrari and the Monegasque driver," added the team. "This damage has a financial impact and also racing ramifications, given that over the remaining 12 race weekends this season, it is highly likely the team could be obliged to fit a fourth ICE to Charles' SF21, thus incurring grid penalties."

With Red Bull waiting on news as to whether Sergio Perez' engine suffered a similar fate, the FIA and F1 are sure to face questions over the issue of compensation.

Following the first corner clash at Silverstone, Christian Horner claimed that the £1.3m 'repair bill' would bite into his team's budget - this being the first year of the budget cap - and this, coupled with Sunday's incident, will now further impact the team financially at a time it is challenging for the title.

The Austrian outfit is seemingly not alone in feeling that those responsible for such incidents should foot the bill, particularly in situations like this where the 'innocent victims' face a double whammy.

Speaking at the weekend, Mattia Binotto told reporters: "I think there is value for discussions in the near future with the other team principals, FIA and F1.

"Obviously if you're not guilty, having such damage in the budget cap is something which is even more of a consequence now.

"Should we add exemptions? I'm not sure that’s the solution," he admitted. "I think it may be very difficult to be policed.

"But I think that what we may consider is that if a driver is faulty, the team of the driver should pay at least to the other teams for the damages and repairs. That will make the drivers more responsible."